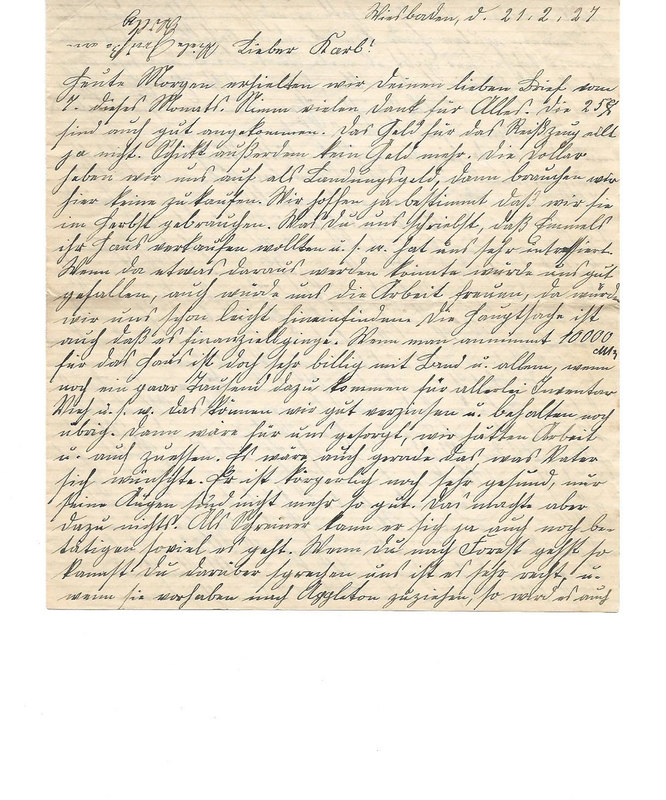 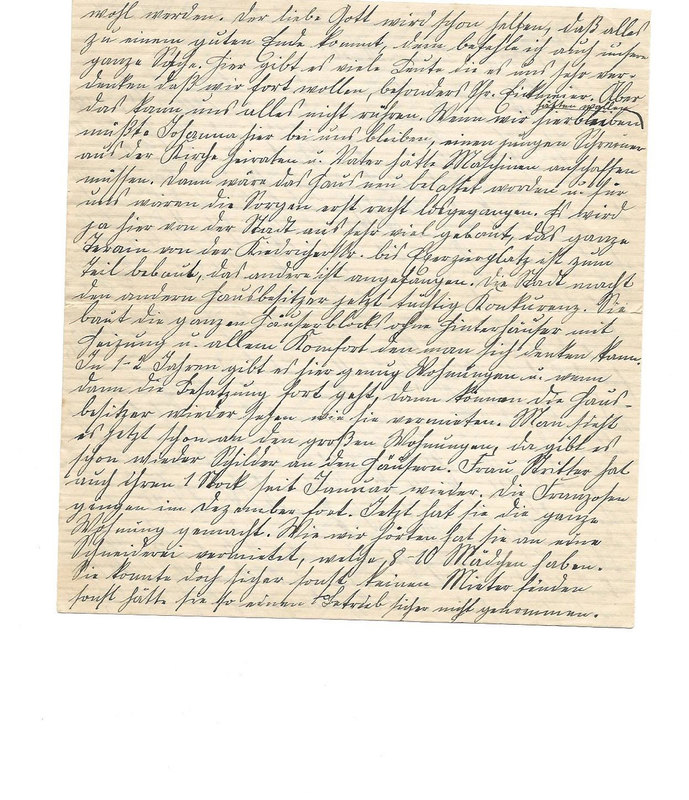 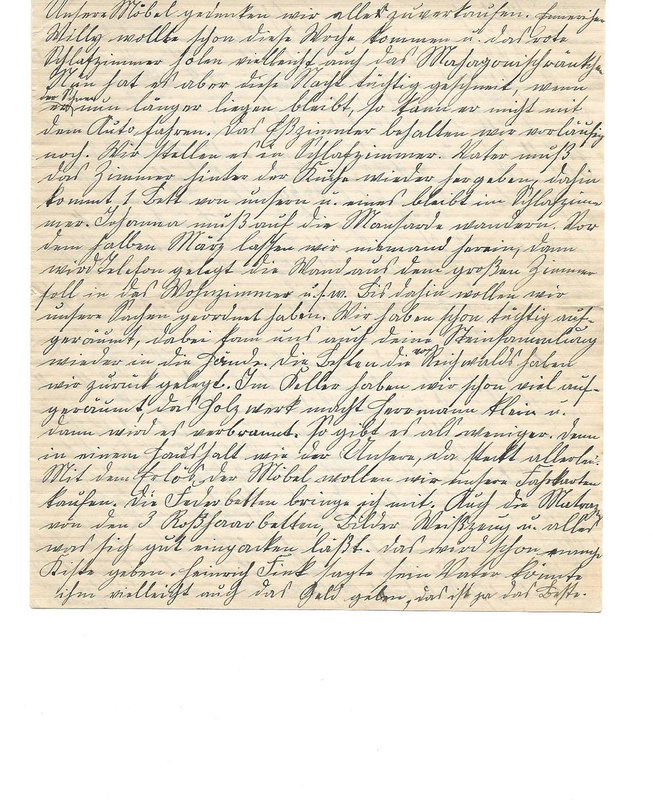 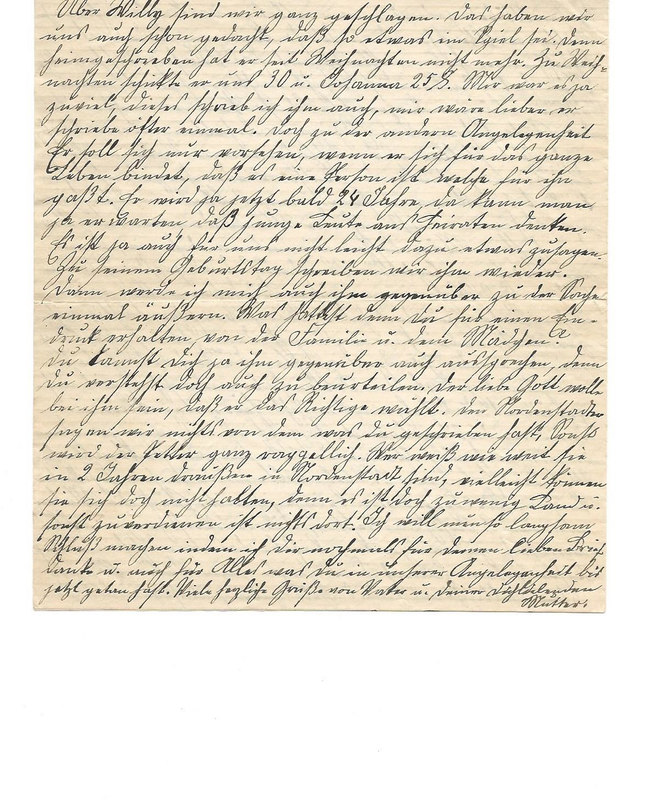 […]The $25 got here as well. There is no need to hurry with the money for the linen items. Stop sending money. We will save the dollars now for when we arrive there. That way, we won’t need to buy any here. We do hope that we will be able to use those dollars in the fall […] The fact that the Emmels want to sell their house has got our attention. It would be really nice if that would work out for us. And we would enjoy the work as well and be able to ease into everything fairly quickly. Most important is the fact that it would be financially feasible. Considering that the house costs about 10,000 marks, including land and everything else, we couldn’t complain. Even if we had to invest a few thousand more for various furnishings, livestock, etc. We could easily take out a credit and keep some cash. That would take care of us. We would have work and something to eat. Besides, this is exactly what Father would like to do. He is still very healthy; only his eyes are not like they used to be[…]In addition, he could still work as a carpenter wherever possible. Feel free to talk about it, should you go to Forest; we are very interested. If they indeed want to move to Appleton, this could very well work out. I am confident that the good Lord will bring a good end to this and entrust everything to Him. Many people here hold the fact that we want to leave against us, especially Reverend Eickmeier. However, we cannot let that bother us. If we stayed here, Johanna would have to stay with us, marry a young carpenter from our church, and father would have to buy equipment for him. We would have to take a new mortgage on the house and the worries would just begin. As you know, the city has a large number of construction projects in progress. The entire area from Kiedricherstrasse to the Parade Square is being built over; half is already completed, and on the other half construction has started. The city is creating some serious competition for the private house owners. It is building the new apartment buildings without courtyards and parts attached in the back. In addition, the new houses have heating systems and every amenity imaginable. In one or two more years, there will be enough apartments here, and once the occupation forces leave, private house owners will have a hard time finding renters[…]We intend to sell all our furniture. Willy from Ennerich wanted to come this week and pick up the red bedroom—and perhaps the little mahogany cupboard. We will keep the dining room furniture for now. We are moving it into the bedroom. Father has to give up the room behind the kitchen again. […]Johanna has to move into the dormer. […]We did quite a bit of cleaning out already. While doing so, we came across your rock collection. We kept the nicest ones from Reichswald. […]We will use the money from the sale of the furniture to buy the tickets. I will bring the duvets along as well as the mattresses from the 3 horsehair beds, paintings, linens, and other things that are easy to pack. […]Heinrich Fink said his father might to able to give him the money as well, which would really work best.

We are quite disappointed with Willy, but—somehow—had thought that something like this might be going on. After all, he has not written to us since Christmas. For Christmas, he sent us $30 and Johanna $25. I thought it was too much and told him so in a letter. I also let him know that I would prefer it if he wrote more often instead. […] He better make sure he has found the right person before making a life-long commitment. Granted, he is almost 24 years old, and I can understand that, like all young people, he is starting to think about marriage.

[…]What was your impression of the family and the girl? May God watch over him and help him make the right choice.

We won’t tell the folks in Nordenstadt what you wrote to us, or else Petter will become very upset. Who knows where they will be in Nordenstadt two years from now. Maybe they will not be able to hold on, for they have too little land and there are no opportunities to supplement one’s income there.

[…]Thank you for everything you have done on our behalf so far. […]Kindest regards from father as well […] Mother. Say hello to Willy, too.