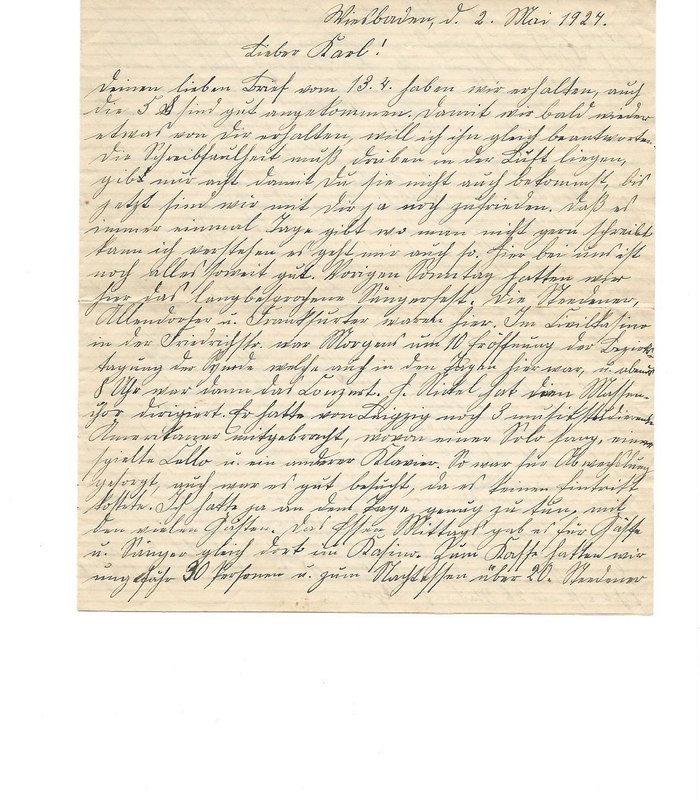 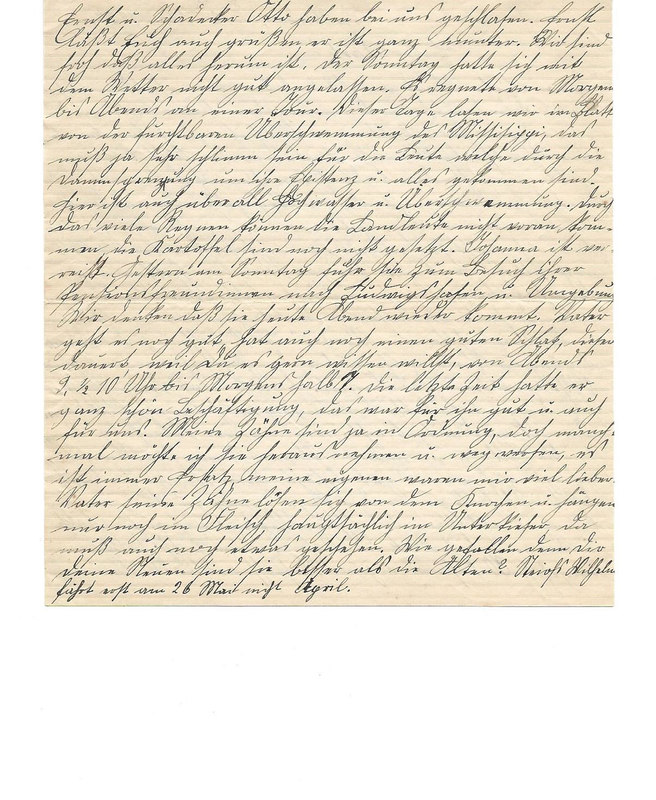 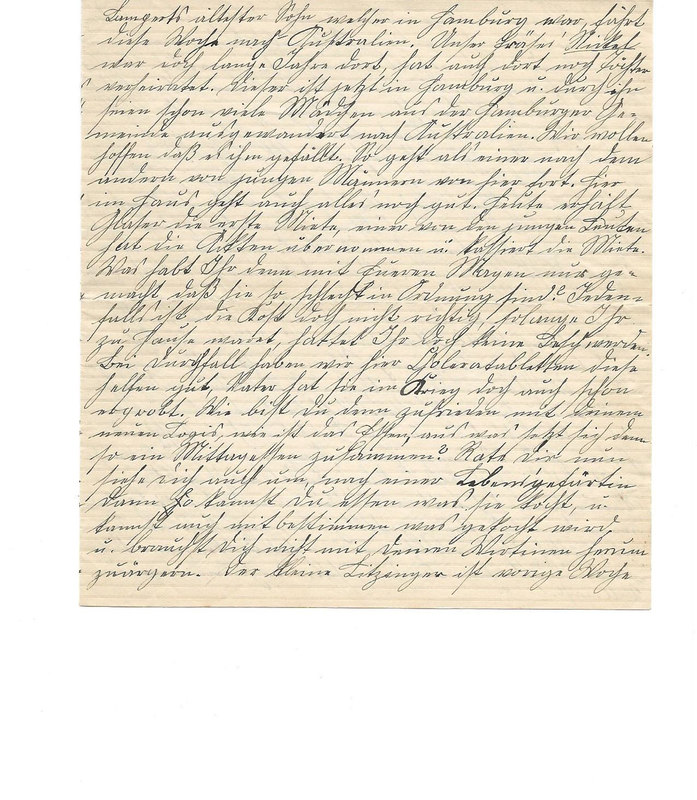 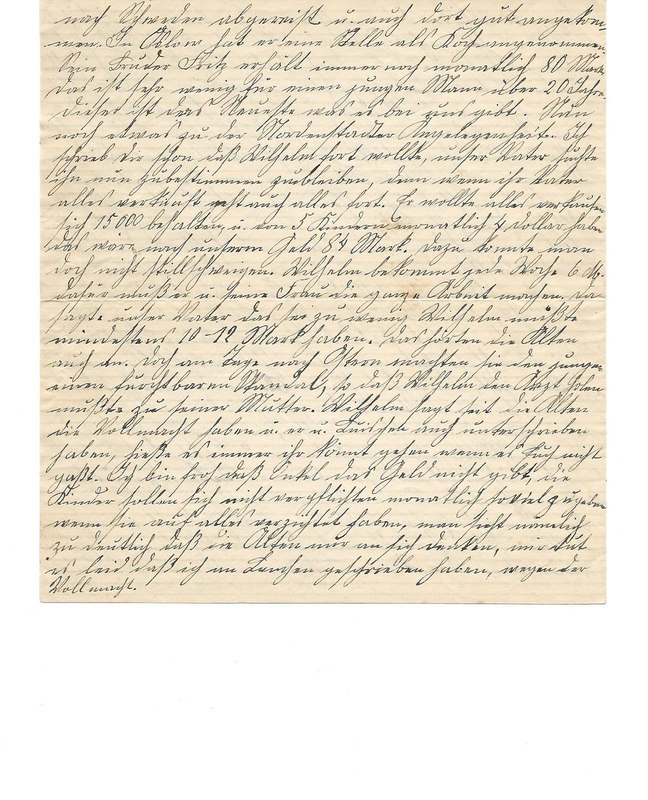 [....]Received your letter dated April 13th [...] and the $5 as well [...] There must be something in the water over there that turns people into lazy letter writers. Just be careful and try not to catch it yourself! [...] Two Sundays ago, we hosted the Choral Festival after extensive planning. We had relatives from Steeden, Allendorf, and Frankfurt visiting us. The Zivilkasino on Friedrichstrasse served as venue for the performances. At 10 a.m., the Synod, which convened at the same time, began its district conference. The concert started at 8 p.m. H. Nickel conducted the mass choir. He had brought along 3 American muisic students studying in Leipzig. One of them sang solo, another played the cello, and the third the piano. [...] Many people attended the concert since it was free of admission. I was quite busy on that day with all those guests. Lunch for the guests and singers was served at the casino. Later, I had about 30 people here for coffee and over 20 for dinner. Ernst from Steeden and Otto from Schadeck spent the night at our house. [...] The weather did not cooperate at all on Sunday; it rained all day. [...] Everywhere, the river levels are very high, and there is flooding. Due to the frequent rain, the farmers cannot get anything done. They have not been able to plant the potatoes yet. [...] Recently, Father had had a decent amount of work, which was good both for him and us. Although my teeth are all right, I sometimes feel like taking them out and throwing them away; artificial is artificial, no matter what. Father’s teeth are loosening in the bone. All that is holding them is the gum tissue, especially in his lower jaw. Something will have to be done there yet as well. [...] the son of the Lampert family, who used to live in Hamburg, is leaving for Australia this week. Nickel, the President of our synod, spent years there. He even married some of his daughters off in Australia. Now he lives in Hamburg. With his help, many young girls from Hamburg have emigrated to Australia already. [...] Today, Glaser is collecting the first rent payments. [...] what have you done to your stomachs to end up with all these problems? There has to be something wrong with the food you are eating! As long as you lived at home you never had any problems. Here, we take cholera tablets against diarrhea, which work very well. [...] I suggest you start looking for a wife as well. Then you can eat what she cooks and will have a say in what ends up on the table. That would be the end of your troubles with your landladies‘ cooking.

Now a little update on things in Nordenstadt. I informed you earlier that Wilhelm waned to leave. So Father tried to get him to change his mind and stay. After all, once their father sells everything, it will all be lost to the family. He was planning to sell everything and keep 15,000 marks for himself. In addition, he wanted each of his 5 children to pay him $4 monthly, which equals 84 marks. We could not remain silent. Wilhelm gets 6 marks per week for doing all the work, together with his wife. Father said that that was not enough and that Wilhelm should receive between 10 and 12 marks. The folks listened to him silently. However, the day after Easter, they made a terrible scene in front of the young couple. It got so bad that Wilhelm had to call the doctor for his mother. Wilhelm tells us that, ever since the folks have the Power of Attorney – with his and Luischen’s signatures as well – they keep saying "Why don’t you leave if you don’t like it here.“ I am glad that Uncle is not helping out with any money. I do not think that the chidren should commit to giving this much money after having renounced everything. It has become very obvious that the folks only think of themselves. I now regret having asked Lenchen to send the Power of Attorney.

[End of letter not found]