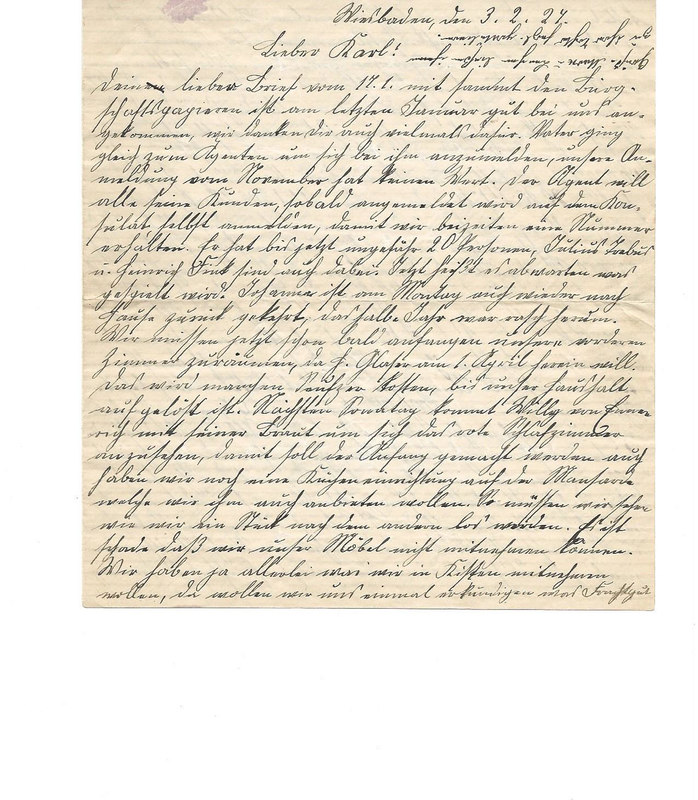 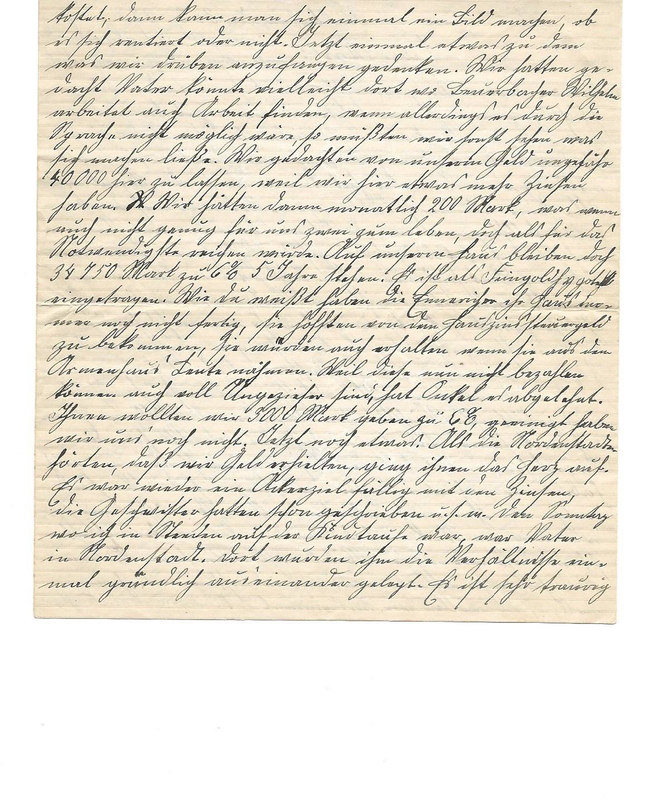 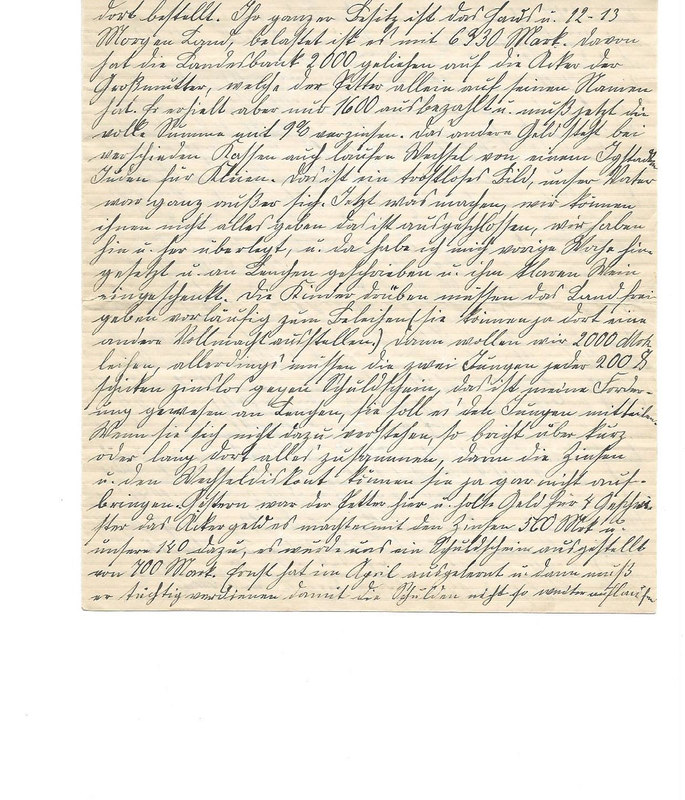 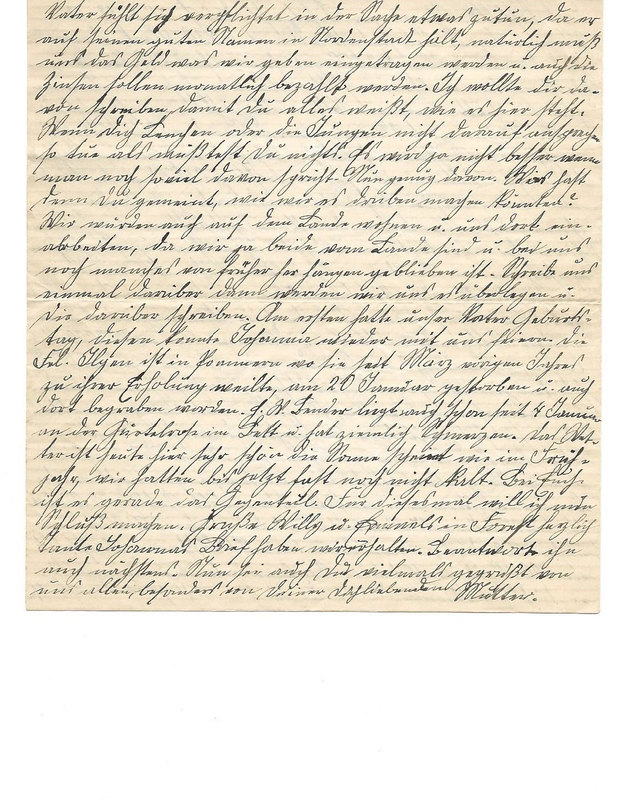 Letter from Caroline Emmel to her son, Karl Emmel, February 3, 1927.

We received your dear letter from the 17th of January with the declarations of suretyship on January 31st[. . .] Father met with the agent immediately in order to submit our application. Our applications from November are invalid. The agent wants to submit all applications to the consulae immediately and in person, so that his clients may receive their number in good time. So far, he has applications from 20 people, including Julius Trebus and Heinrich Fink[. . .] On Monday, Johanna returned for good. How quickly the six months have passed! Soon, we will have to start emptying out our rooms since Glaser wants to move in on the 1st of April.

[. . .] Next Saturday, Willi from Ennerich and his bride will come to look at the red bedroom. That is just the beginning. We also have some kitchen furnishings stored in the dormer, which we will offer to them as well. This way, we are trying to get rid of one item after another. It is too bad that we cannot take our furniture along. We do have all kinds of things that we would like to take along in crates. We will find out what it would cost to have them shipped and then decide whether it is worth it. Regarding our plans for when we get there: we thought that, maybe, Father would be able to work at the same place Wilhelm from Beuerbach is employed. However, if that is not possible because of the language barrier, we will have to find some other solution. We intend to leave about 40,000 marks of our capital here since the interest rate is a bit higher. We would then have 200 marks per month for the two of us, which is not enough to make a living, but sufficient to cover basic necessities. As you know, there is a mortgage in the amount of 34,750 marks with an interest rate of 6% on our house. It is registered as a refined gold mortgage. Our relatives in Ennerich still have not finished building their house. They had hoped to receive money from the rental tax fund. And, indeed, they would receive funds if they took in people from the poor house. However, since those people cannot pay and are full of lice, Uncle rejected the offer. We wanted to lend them 3,000 marks at 6% interest, but have not come to an agreement yet. Now something else I wanted to write about.

When the relatives in Nordenstadt heard that we were getting some money, they poured out their hearts. Another payment with interest was due on their land; the siblings had already sent a letter; etc. etc. On the Sunday that I attended the baptism in Steeden, Father was in Nordenstadt. There, they explained their financial situation to him in detail. Things look very bad indeed. All they own is the house and 12-13 acres of land, which are mortgaged with 6,330 marks. Of that mortgage, the state bank lent 2,000 marks for Grandmother’s acres, which are in Petter’s name exclusively. However, he only received payment of 1,600 marks and now has to pay back the full amount at 9% interest. The remaindeer of the mortgage is owed to various banks. In addition, there are several bills of exchange in circulation, issued by a Jew from Igstadt and guaranteed by bran. It really is a pitiable situation; Father was very upset. What should we do now? We cannot give them everything; that is out of the question. We kept thinking about the situation, and then last week, I sat down and wrote Lenchen a letter in which I told her the sad truth. The children over there have to give up their rights to the land- just for mortgaging purposes at this time. (They can draw up a Power of Attorney over there.) Under this condition, we will lend 2,000 marks. However, the boys will each have to send $200, free of interest. In exchange for a promissory note. That is what I wrote to Lenchen, asking her to present my proposal to the brothers. If they cannot agree to that, the situation in Nordenstadt will collapse sooner or later, for it is impossible for them to pay the interest and bank discout fees. Yesterday, Petter was here to get money. The amount of money he owed his 4 siblings for the land, including interest, was 500 marks. After we added our 140 marks, we received a promissory note in the amount of 700 marks. Ernst will finish his apprenticeship in April and will need to work hard to keep the debt from accumulating at the current rate. Father feels obligated to help out in some way bwcause he cares about his reputation Nordenstadt. It goes without saying that the loans we give are registered and that interst has to be paid monthly. I just wanted to fill you in on everything that is going on here. If Lenchen and the boys do not mention anything to you, just act as if you did not know.

[....]What do you think we could do for a living over there? We would not mind lving in the country and starting something new there since we both grew up in the country and still know what a country lifestyle entails. Please let us know your thoughts on this. Father’s birthday was on the 1st. This time, Johanna was able to celebrate with us again. H.W. Bender has been bedridden since the 4th of January. He is suffering from shingles and experiencing quite a bit of pain.