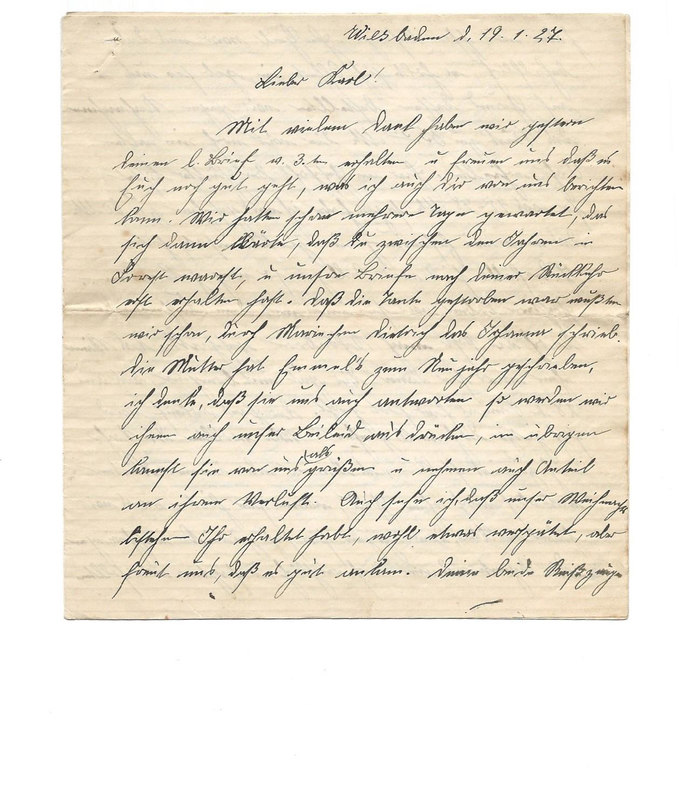 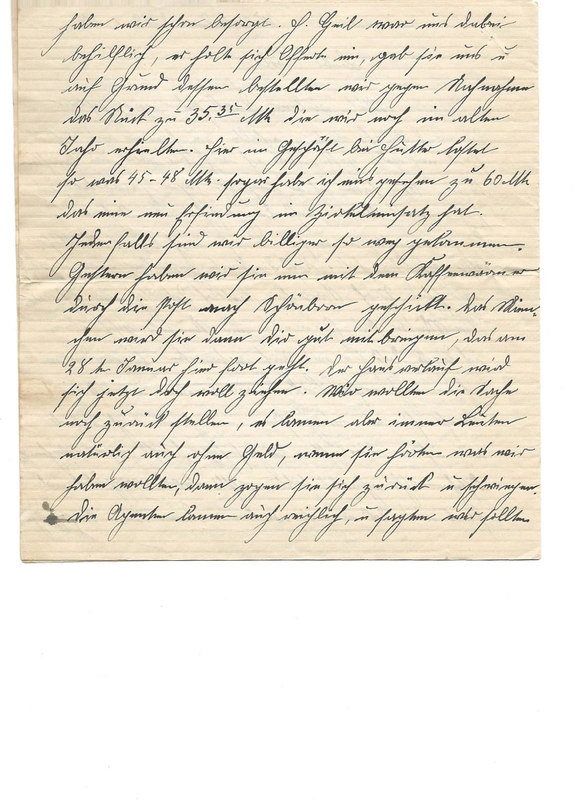 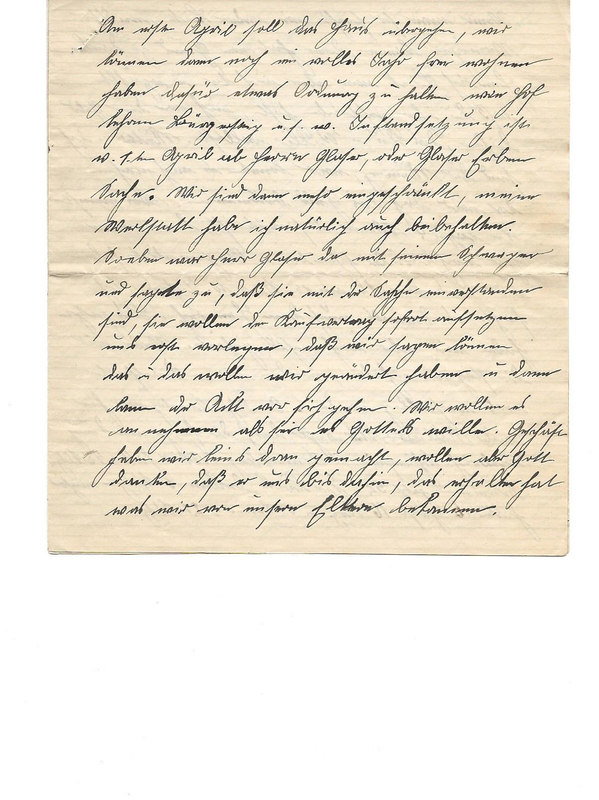 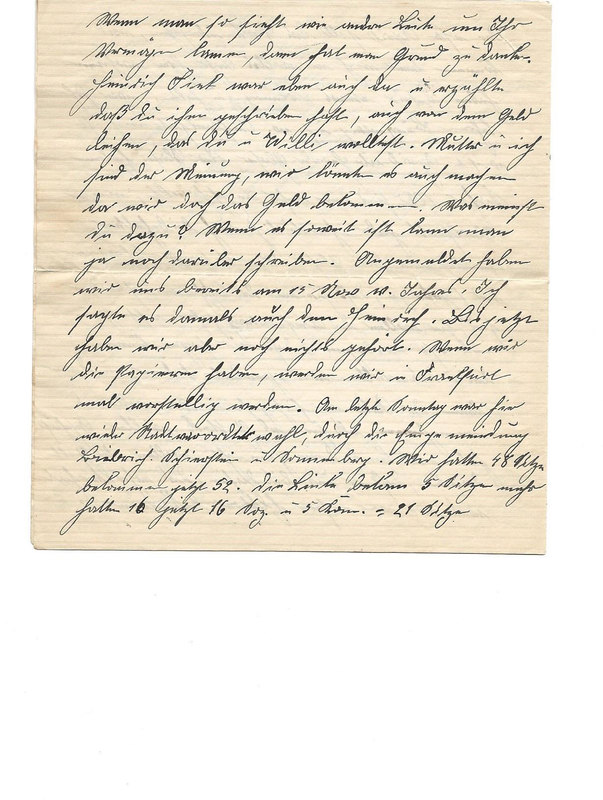 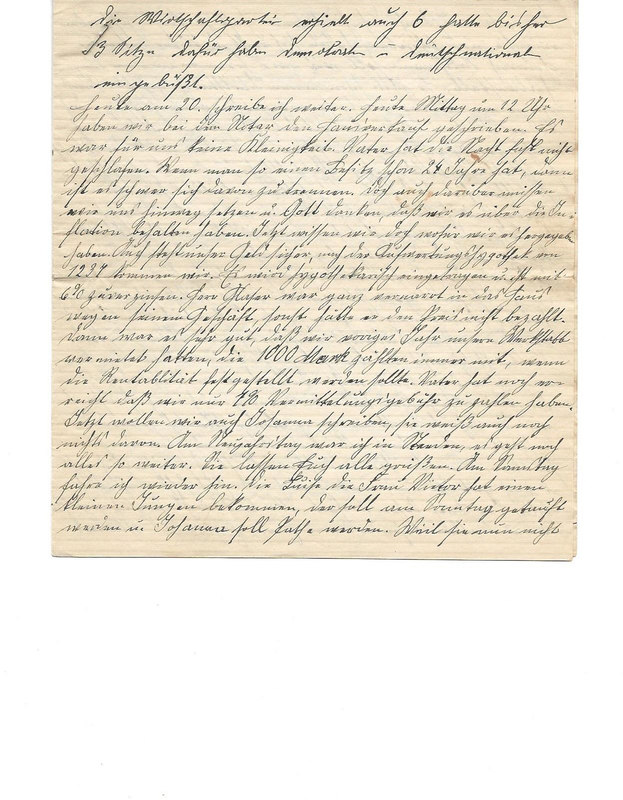 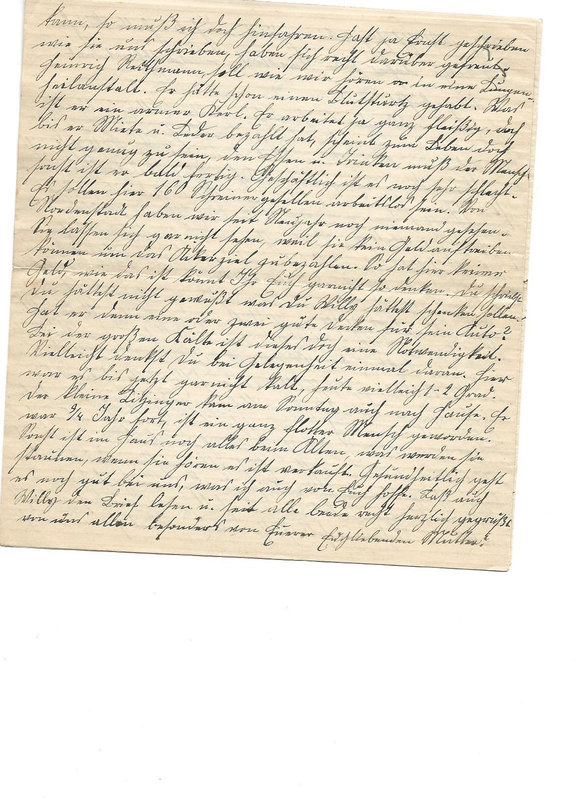 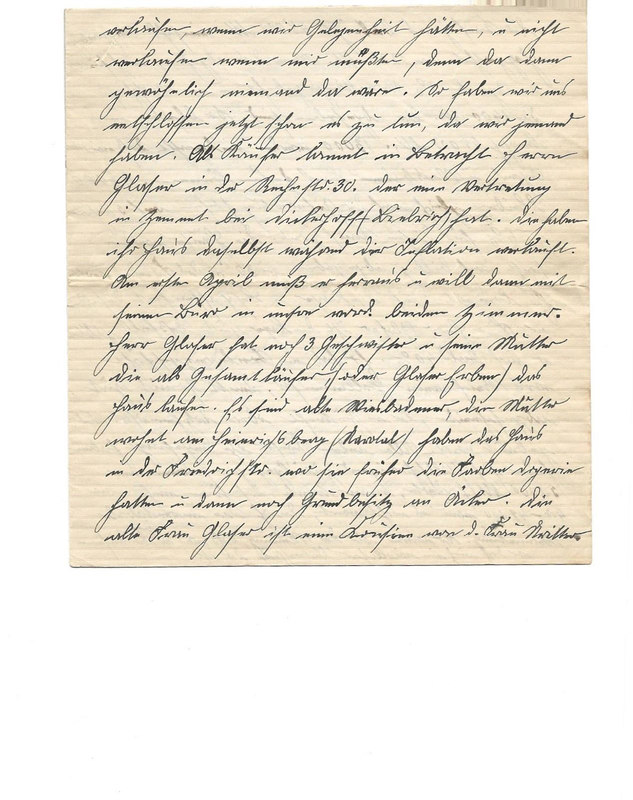 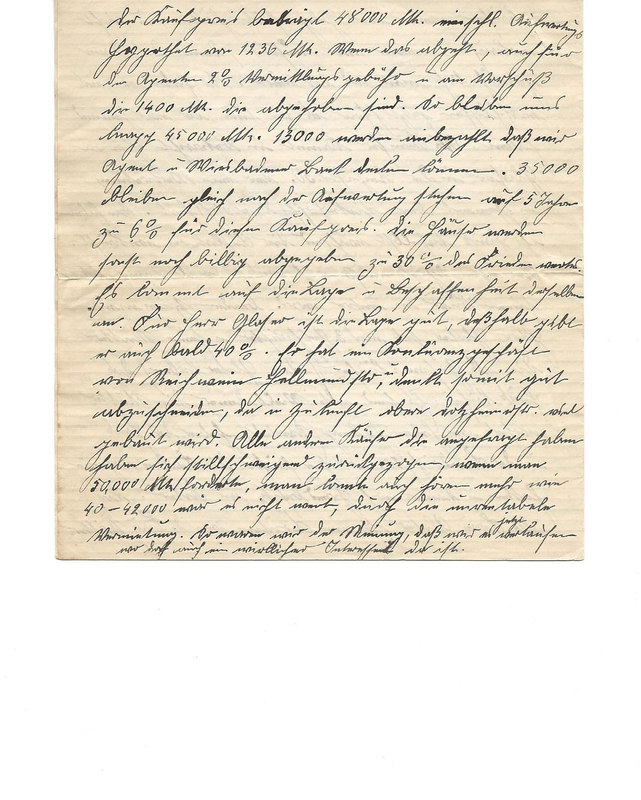 Letter from Wilhelm and Caroline Emmel to their son, Karl Emmel, January 19, 1927.

We have already received your two linen items. Mr. Geil [?] helped us with the purchase; they cost 35.35 marks a piece. At Hutter’s store, these things cost between 45 and 48 marks. Yesterday, we sent them, together with the coffee warmer, to Schönborn via postal services. Minchen, who is leaving on the 28th of January, will take good care of them and deliver them to you. We are selling the house after all. [. . . .] We have had several realtors come and look. They say we should sell if we have an opportunity. [. . .] And so we decided to sell the house now since we have a buyer. The buyer is Mr. Glaser from Pheinstrasse 30, who runs a cement business, an agency for the Dyckerhoff Company. in Biebrich. They solld their house in Biebrich during the time of inflation. On the 1st of April, he has to move. He wants to move his office into the two rooms in the front part of our house, Mr. Glaser had 3 siblings as well as his mother to consider; They intend to buy the house together, as a community of Glaser heirs. They are an old-established Wiesbaden family, with the mother living on Heinrichsberg (Nerotal). Their house is on Friedrichstrasse, where they used to have the paint store. They also own some fields. The selling price is 48,000.00 marks, including a revaluation mortgage for 1,236.00 marks. Once that sum is deducted as well as the agent’s commission of 2% and the 1,400 mark advance, we will be left with 45,000.00 marks. [. . .] 35,000.00 will remain invested in the house immediately after revaluation, financed for 5 years at 6% at this purchase price. Many houses are still sold for a cheap price, namely for 30% of the peacetime value. Mr. Glaser is doing fine; that is the reason why hi is paying close to 40%.

The property transfer will take place on April 1st [...] From then on, we will have the right to live in the house without paying for one year. The only obligation we have is to keep it clean. We will be a bit more limited in space. Naturally, I kept my shop. Mr. Glaser was just here with his brother-in-law and confirmed that they agreed to the conditions. They want to draw up the contract immediately, so that they can present it to us for approval. After that, we can proceed with the sale. We look at it as if it were God’s will. We are not making any profit from the sale, but thank the Lord that He helped us preserve what we received from our parents. We submitted our applications on November 15 already [...] However, we have not received any response yet. As soon as we get the papers, we will go to the Frankfurt office [...]


[Mother, in the same letter]

Today, on the 20th at noon, we met with the attorney and signed the sale contract. It was not easy for us. Father hardly slept last night. It is hard to separate from your house after owning it for 24 years[....] However, we know why we did it. And our money is safe [...] It will be registered as a mortgage with an interest rae of 6%. Mr. Glaser wanted the house very badly for his business. Otherwise, he would not have paid this kind of price. We will now write to Johanna as well since she does not know anything yet [...] On Saturday, I will go to Steeden. Luise, or Mrs. Vietor, has had a baby boy, who will be baptized on Sunday. Johanna is supposed to be the godmother, but cannot go there. Therefore, I will go instead. We heard the Heinrich Reithmann is supposed to go to a tuberculosis sanatorium. Apparently, he had a hemorrhage. The poor fellow! He works so hard. However, by the time he makes enough money to pay for rent and leather, there is hardly anything let to make a living. But man needs to have food and drink; otherwise he will not last long.

We have not seen anyone from Nordenstadt since the New Year. They seem to be hiding because they cannot come up with the money to pay for their land.

[. . .] You write that you could not think of anything to give Willy for a present. Dloes he have a good blanket or two for his car? In this cold weather this seems to be a necessity. Think about it when you get a chance[. . .] Please have Willy read the letter as well[. . .] Kindest regards[. . .] Mother