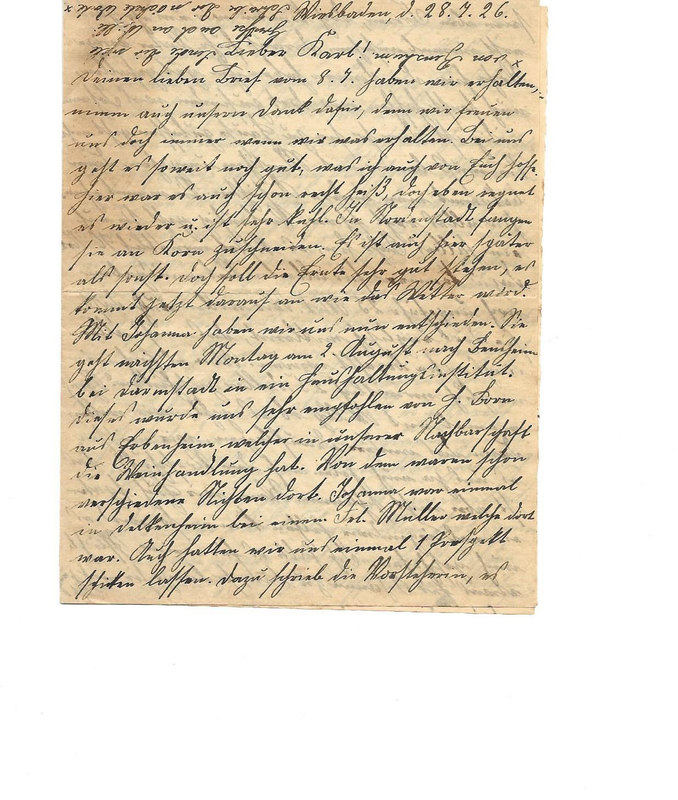 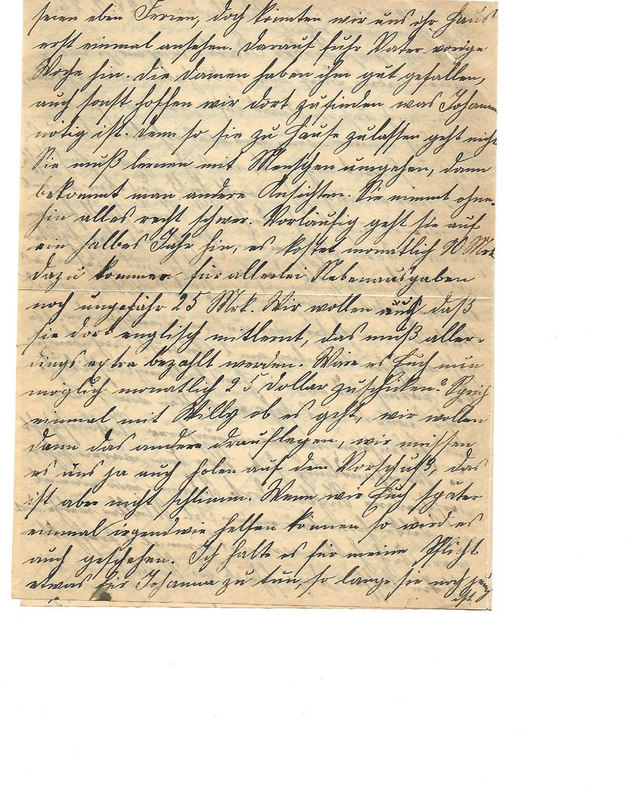 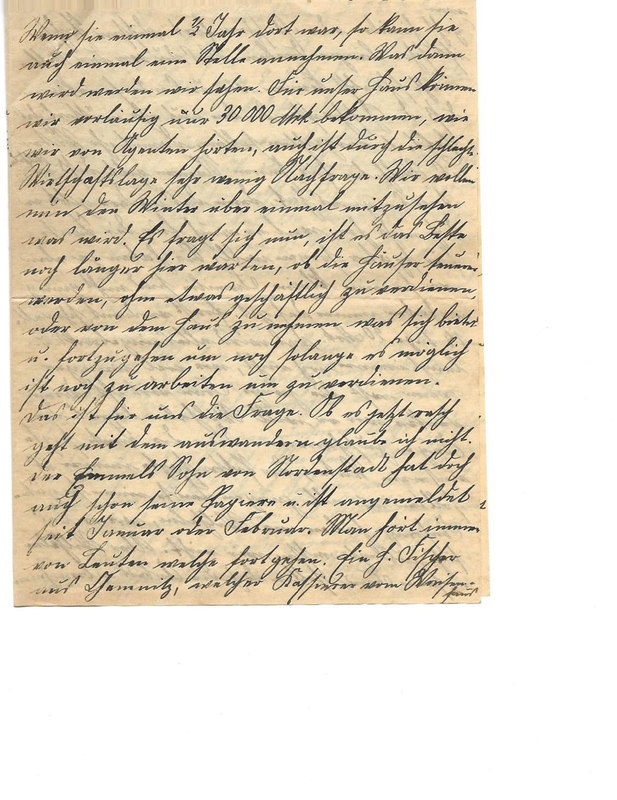 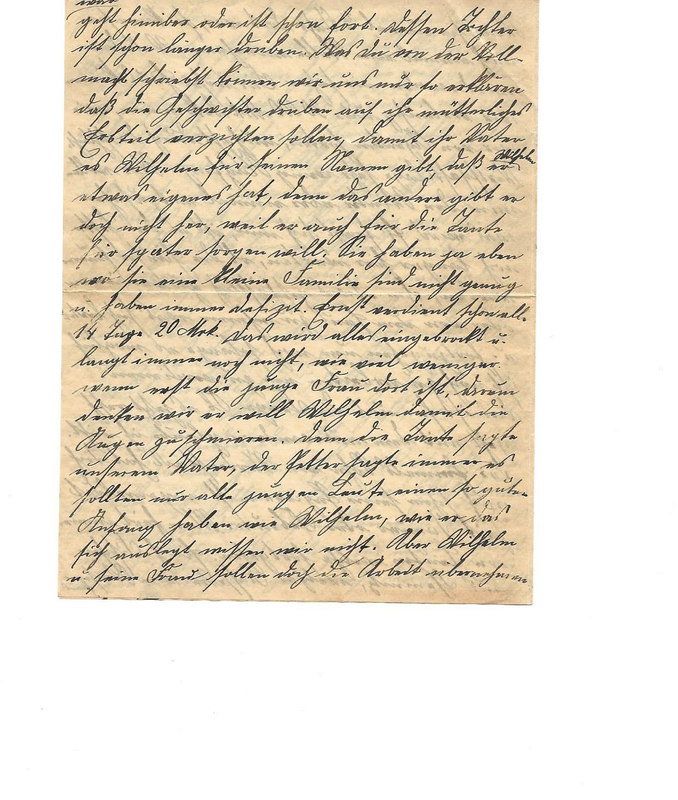 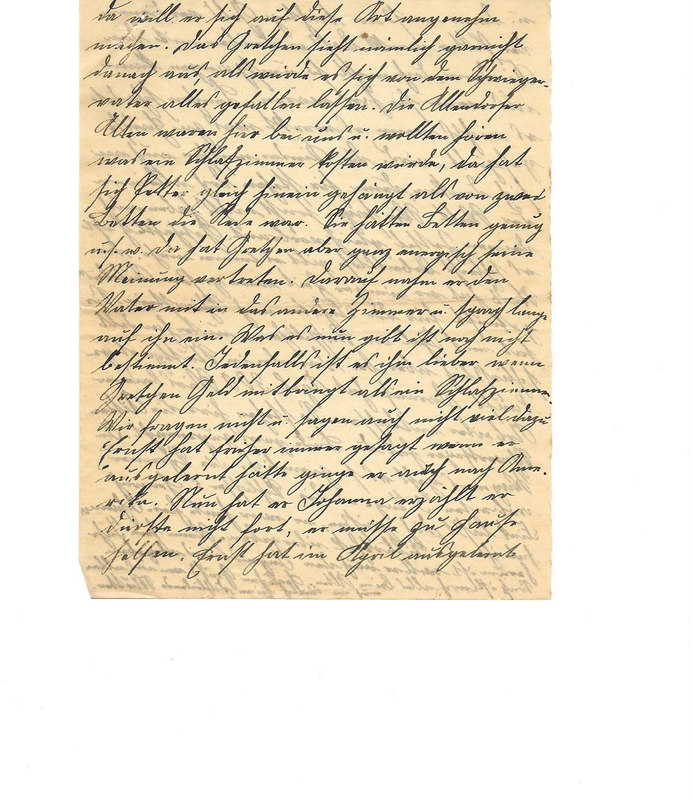 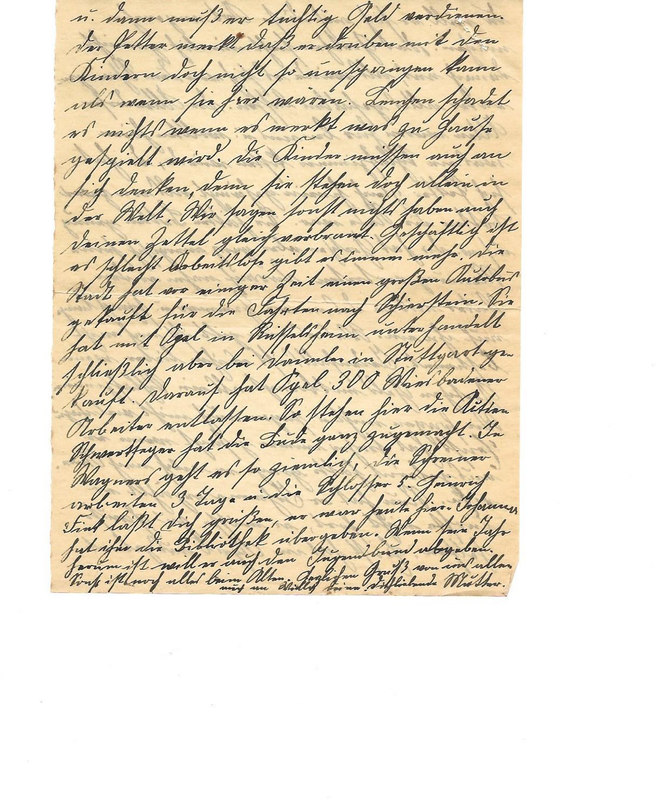 We received your letter dated July 8th […] It has been quite hot already, but now it is raining and cooler[…]

In Nordenstadt, they have just started to harvest the corn; it is a bit delayed here as well. The harvest is supposed to turn out well. Everything depends on the weather now.

We have come to a decision concerning Johanna. Next Monday, the 2nd of August, she will leave for Bensheim near Darmstadt to attend a housekeeping school. The school was highly recommended by Mr. Born from Erbenheim, the owner of a wine business in the neighborhood […] In addition, we ordered a brochure. The director included a note saying we should come and look at the school first. And so Father went there last week. He thought the ladies were very nice. We hope to have found what Johanna needs, for we cannot keep her at home like this any longer. She has to learn to interact with people. That way, she will gain some new perspectives. She takes everything so serious. For now, she is supposed to stay there for six months. It costs 90 marks per month plus various additional charges totaling about 25 marks. We also would like to see her study English there. However, that is charged separately. Therefore, would it be possible for you two to send us $25 per month?

Please talk to Willy and see if that is feasible. We would then pay the difference. We will have to take out a loan, but we do not mind. If we can help you out sometime in the future, we will gladly do so. I feel an obligation to do something for Johanna while she is still young. After having been there for half a year, she should be able to get employed somewhere. Our house would currently sell for about 30,000 marks […] Due to the bad economy, demand has decreased […] Now the question is: Should we wait longer and see whether house prices will rise again and not really make any profit, or should we take what we can get now and leave, in order to work and earn money while we still can. That is the big question for us right now. The son of the Emmel family in Nordenstadt has had his papers since January as well.

We can only think of one reason for the Power of Attorney you mention. The siblings over there are probably supposed to renounce their maternal inheritance, so that their father can make Wilhelm the sole heir. That way, Wilhelm would have something of his own. Their father will not give up anything else since he intends to take care of Aunt when the time comes. As you know, they are a small family; and yet they always struggle and run a deficit. Ernst does earn 20 marks per two-week period and has to hand all of it over, and still they are not making it. It can only get worse once the young woman comes to live with them. That is why we think he wants to fool Wilhelm with this. Aunt told Father that Petter keeps saying that all young people should have as good a start as Wilhelm. We do not know for sure what exactly he means by that. However, Wilhelm and his wife are supposed to take over the work, and this is his way of getting on their good side. For, Gretchen does not seem to be the type who would put up with just anything from her father-in-law.

The folks from Allendorf were here and wanted to know what the price of a bedroom would be. When the conversation turned to two beds, Petter instantly barged in. We have enough beds, he said. At that point, Gretchen very assertively stated her opinion. Consequently, Petter pulled her father into the adjacent room and harangued him for quite some time. The final decision has not been made yet. At any rate, he obviously prefers that Gretchen bring money into the marriage.

Ernst used to say that he would go to America as well as soon as his apprenticeship was finished. Recently, he told Johanna that he was not allowed to leave and that he had to help at home. Ernst completed his apprenticeship in April, and now he has to earn as much money as possible. Petter has caught on to the fact that he cannot control his children over there the way he could when they were here. It doesn’t hurt for Lenchen to see through the game that is being played at home. After all, the children have to consider their own well-being as well since they are alone in this world. We don’t really say anything, and we burned your note right away […]

Some time ago, the city bought a large coach bus for trips to Schierstein. It first negotiated with Opel in Rüsselsheim, but ended up buying the coach bus from Daimler in Stuttgart. Consequently, Opel gave notice to 300 workers in Wiesbaden. That is what it is like around here. […] At Wagner’s, things are still going, the carpenters work for 3 days, the metalworkers[…] Heinrich Fink says hello; he was here today. Johanna turned the library over to him. In another year, he wants to hand the Youth League over to someone else. […] Kindest regards […] Mother.