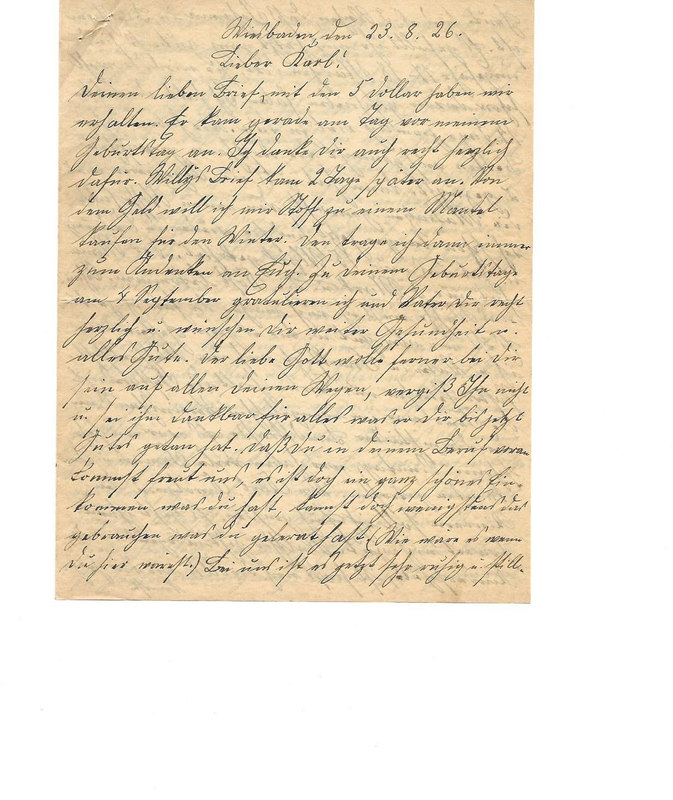 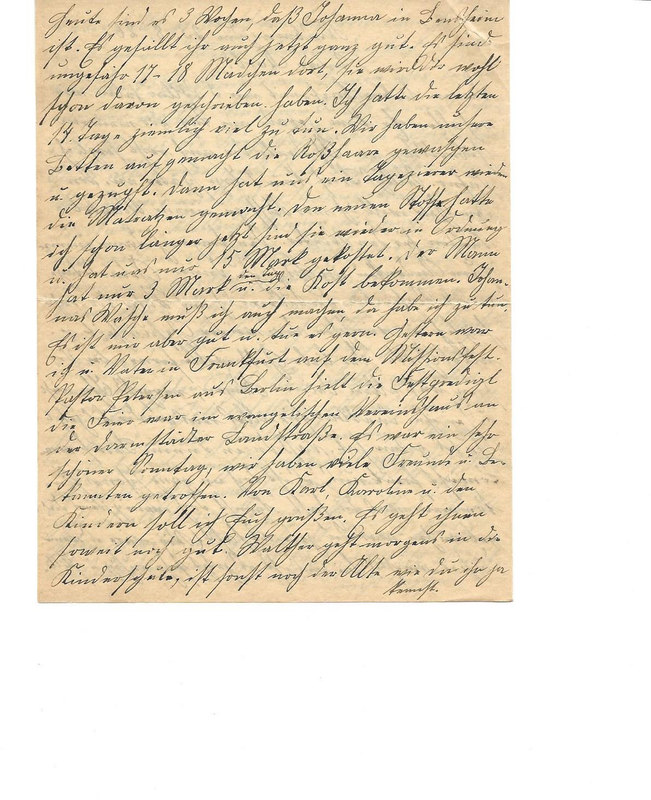 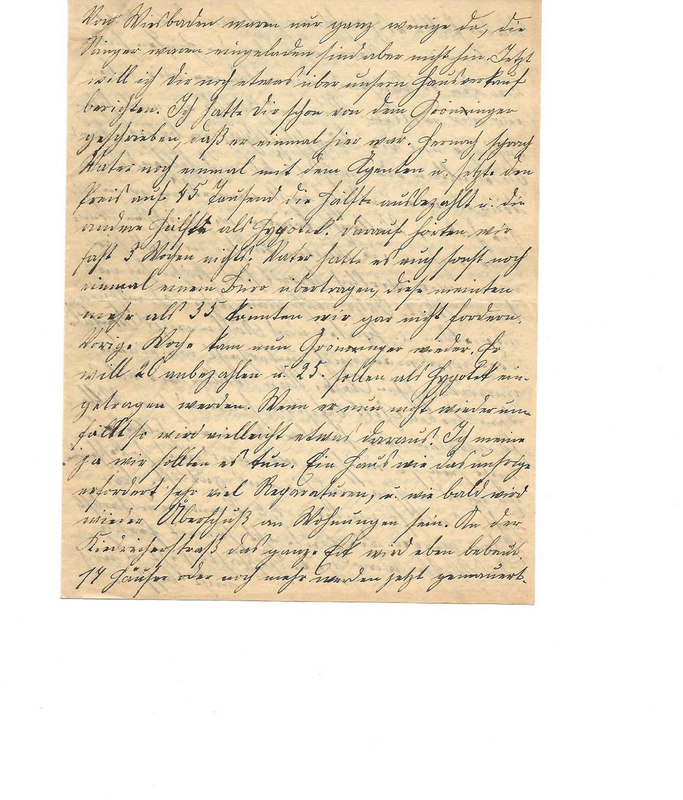 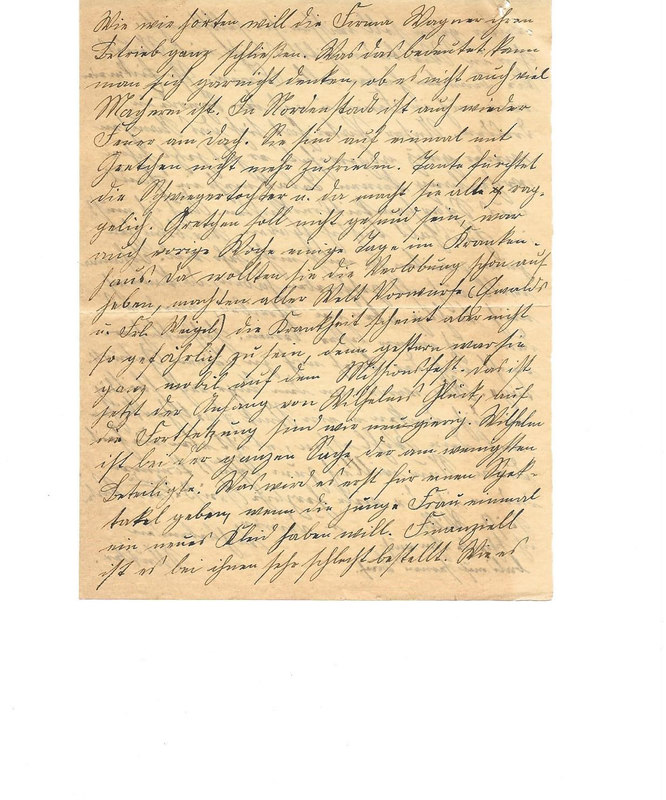 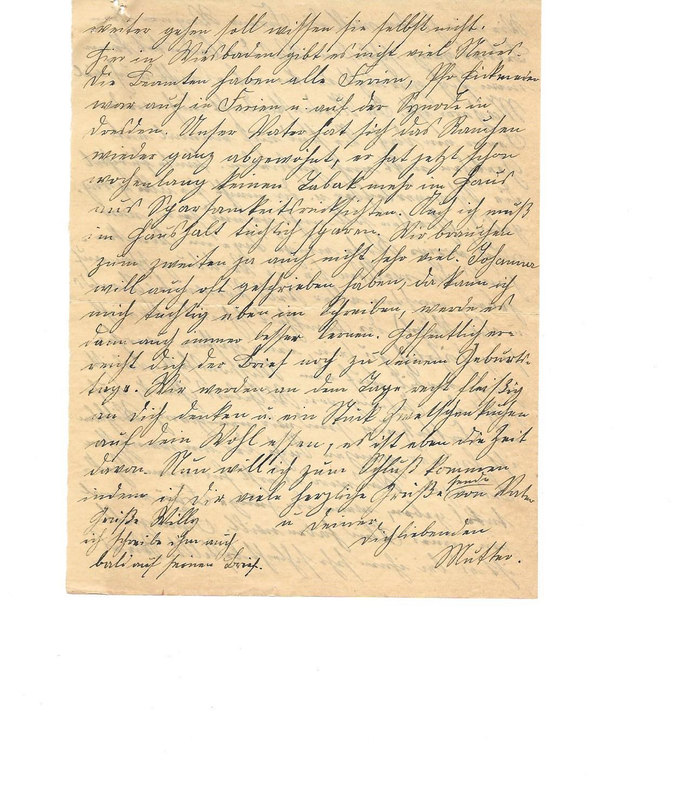 […] We received your letter with the $5, thank you. It arrived exactly on my birthday. Willy’s letter arrived two days later. I will use the money to buy some fabric for a winter coat. I will wear it all the time as something that reminds me of you. Father and I send you our warmest wishes for your birthday on the 4th of September. We hope that you will remain healthy and wish you all the best. May the good Lord keep watching over you wherever you go. Do not forget Him and be thankful for all the good things He has given you. We are happy to learn that you are moving up professionally. You do have quite a nice salary. At least you are able to use what you learned. (How different things would be if you were here!) Johanna has been in Bensheim for three weeks already. She likes it very much. There are about 18 girls there […] I had a lot to do over the past two weeks. We opened up the beds and washed and loosened up the horsehair. Then, a paperhanger made the mattresses for us out of some new fabric I had had for some time. […] It only cost us 1 mark. The man only got 3 marks per day plus meals. I have to do Johanna’s laundry as well, which means that I am quite busy […]Yesterday, Father and I went to Frankfurt to the mission festival, where Reverend Petersen gave a sermon […] It was a very nice Sunday […] We ran into many friends and acquaintances[…] They all say hello. There were only a few people from Wiesbaden there. The choir had been invited, but was not there. I want to tell you a little bit about the sale of our house yet. Earlier, I wrote to you about Grimmiger and informed you that he was here once. Afterwards, Father talked to the agent again, who set the price at 45,000. Half of it is supposed to be paid in cash and the other half mortgaged. After that, we did not hear anything for almost three weeks. Father went to another agency as well, where they told him he could not ask for more than 35,000. Last week, Grimmiger showed up again. He wants to pay 20,000 in cash and put a 25,000-mark mortgage on it. Now, if he does not cave in again, maybe this will work out. I am all for it. After all, a house like ours requires a lot of upkeep, and before too soon the market will be swamped again with apartments anyway. The entire corner on Kiedricherstrasse is being built over. Seventeen houses or more are being built right now. Father has trouble separating from the house. However, once we receive the interest of the 4,000, we can live wherever we want.

We would like you to get the declarations of suretyship for us at this point. Once we have those documents, we will be able to apply. Maybe we can travel next summer. We will not buy the tickets until everything is ready. Nowadays, one has to go to Frankfurt to apply and then to the consulate in Cologne. There, an American doctor performs a medical exam […] Business has not improved yet […] We heard that the Wagner Company intends to go out of business entirely. […]

In Nordenstadt, the sparks are flying again. All of a sudden, they are no longer happy with Gretchen. Aunt is afraid of the daughter-in-law and drives everyone [illegible] In addition, Gretchen is apparently not very healthy and even spent a few days in the hospital last week. They instantly wanted to annul the engagement and showered everybody with reproaches (the Ewalds and Miss Weigel). However, the illness does not seem to be too serious, for yesterday she was quite fit again at the mission festival. This is only the beginning of Wilhelm’s path to happiness. We are curious to see how it continues. Wilhelm seems to remain totally uninvolved in all this. I can just imagine the drama on the day the young woman would like to have a new dress. Financially, things are very bad for them. They have no idea where to go from here. […]

All the civil servants are on vacation. And so was Reverend Eickmeier, who also went to the synod in Dresden. Father quit smoking again; he has not had any tobacco in the house for weeks. I, too, have had to cut back on my household expenses considerably. However, the two of us don’t really need all that much. Johanna says she wrote quite a long letter to you. I hope it gets there in time for your birthday. We will certainly think about you on that day and eat a piece of prune pie in your honor. Give our regards to Willy as well [...] Cordially, Mother.