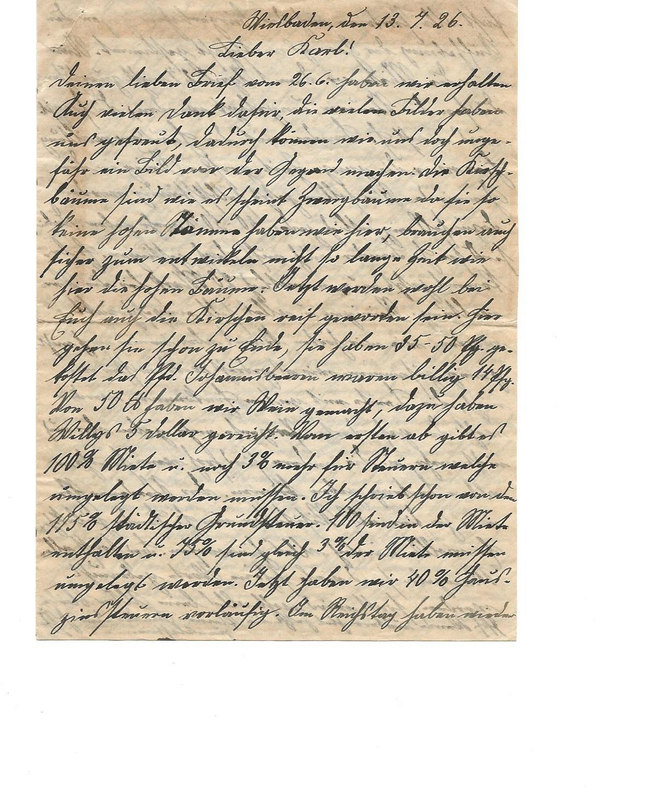 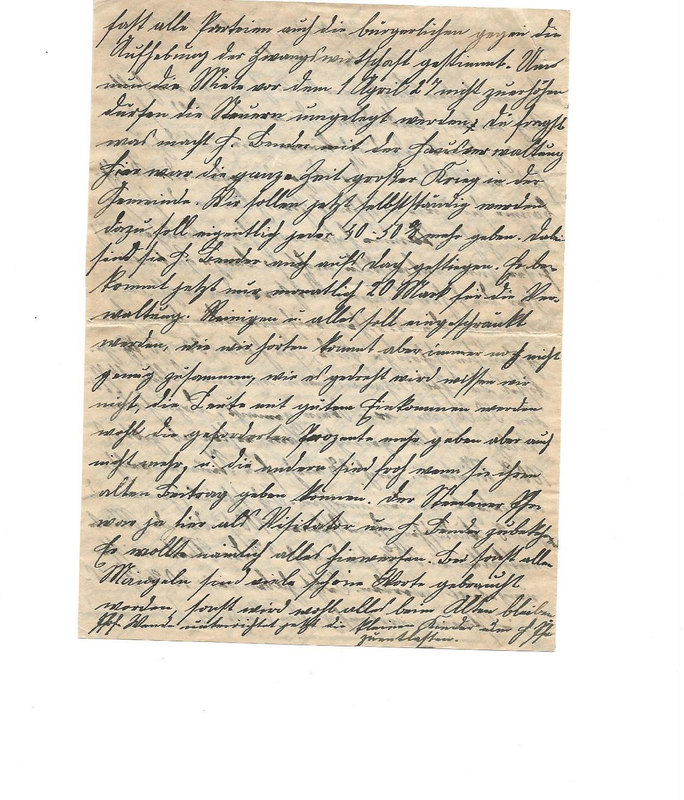 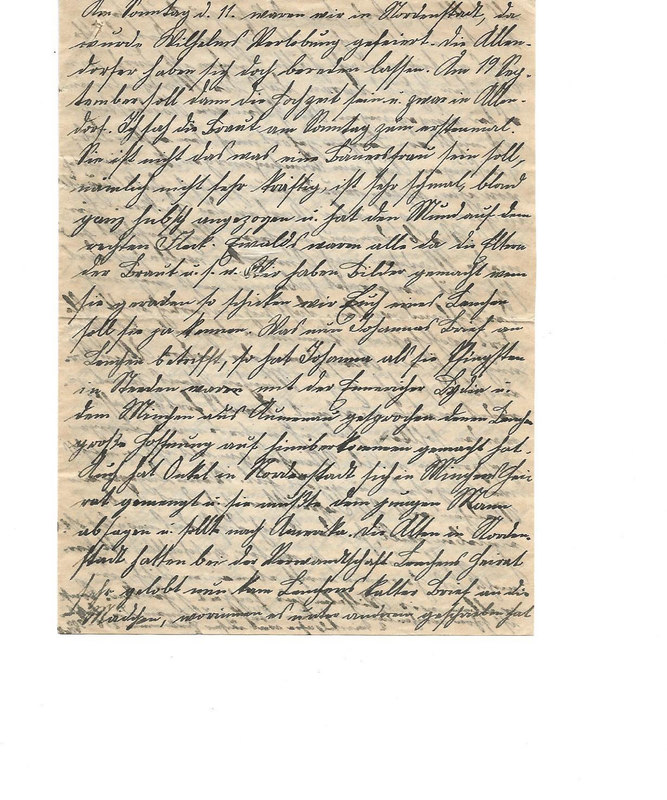 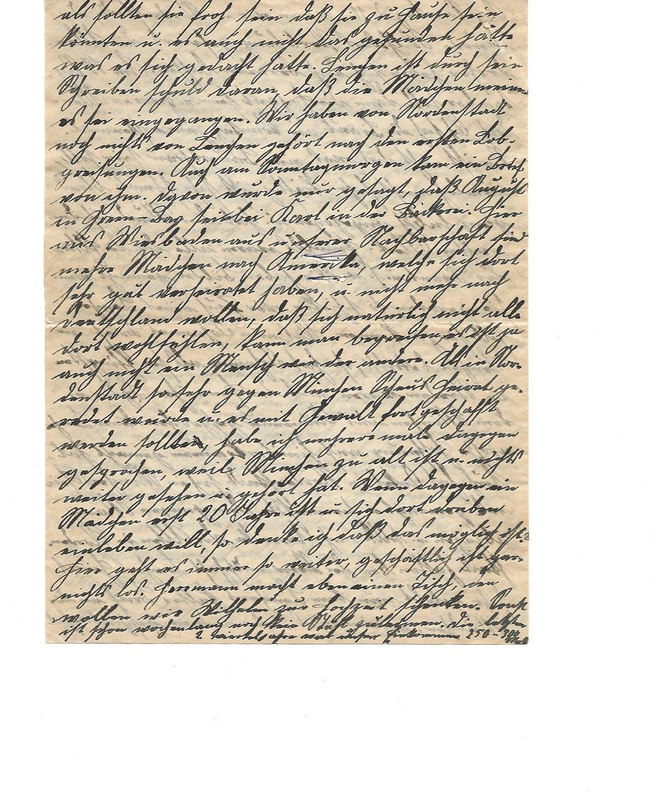 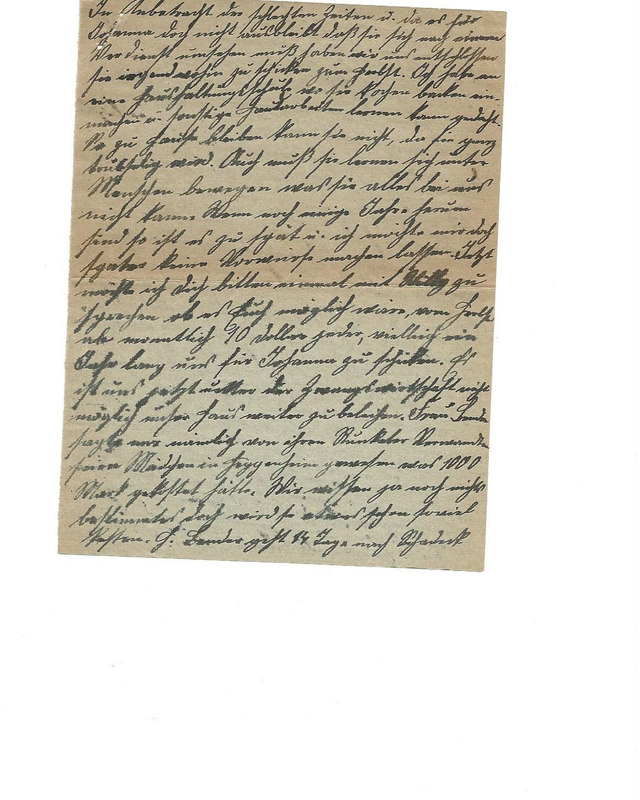 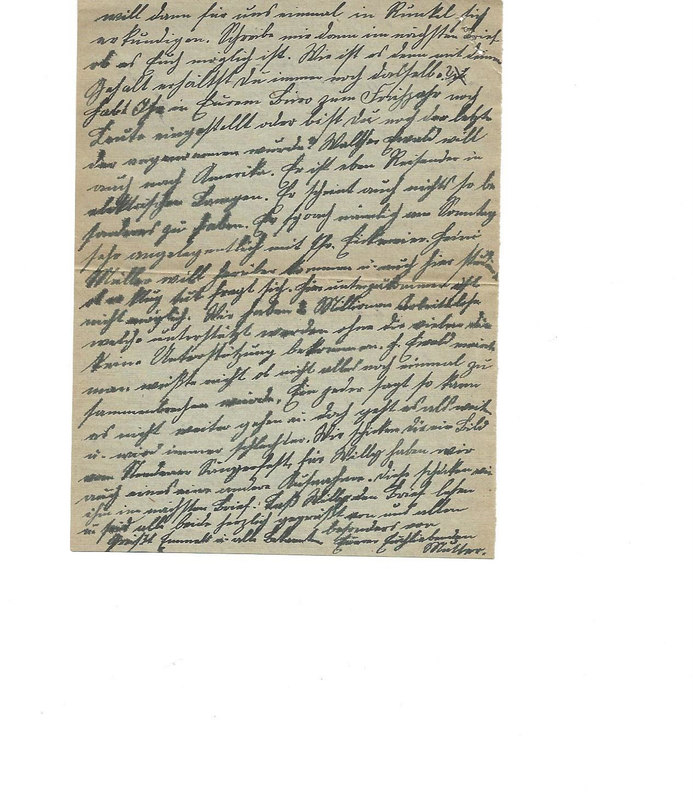 Dear Karl […]received your letter dated June 26 […] we liked the many pictures very much… They give us an idea about what your area looks like. The cherry trees seem to be dwarf trees[…] here, the trunks are higher[…]the price for cherries here was 35 to 50 pfennigs. Blackcurrant was inexpensive, however, 14 pfennigs per pound. We used 50 pounds to make wine; Willy’s $5 were enough to do that […] In the Reichstag, almost all parties, including the middle-class parties, voted against repealing the government control of the economy. This way, rental fees cannot be raised before April 1st, 1927 […] You are asking how H. Bender is doing with the housing management. People here in the municipality have been fighting with each other constantly. We are supposed to become independent, and everyone is expected to pay 40-50% more. Therefore, they went after H. Bender as well. He only receives 20 marks per month for performing his housing management duties now. Cuts are supposed to be made to the cleaning and everything else. However, we heard that the savings are still not sufficient. We don’t know how they are going to do it. I imagine that the people with a decent income will pay the additional percentage requested, but certainly no more. And the others are happy as long as they can afford to pay the old amount. The minister from Steeden came for a visit, in order to make H. Bender convert. He was ready to throw in the towel. But after all the complaints, some nice words could be heard for once. However, everything else will remain the same. Professor Wende is now instructing the young children to lighten the burden on the minister’s shoulders. […]

On Sunday, the 11th, we were in Nordenstadt to celebrate Wilhelm’s engagement. The ones in Allendorf did let themselves be talked into it after all. The wedding is planned for the 19th of September in Allendorf. I met the bride for the first time on Sunday. She does not fit the picture of a farmer’s wife. She is not very strong and very thin. Other than that, she is blond, wore quite a pretty dress, and is very quick-witted. The entire Ewald family was there, the parents of the bride, etc. We took photos; I will send you one if they turn out. Apparently, Lenchen knows the bride. As far as Johanna’s letter to Lenchen is concerned: On Whitsunday, Johanna was in Steeden and talked to Lydia from Ennerich and Minchen from Aumenau and then got Lenchen’s hopes up about coming to America. In addition, Uncle in Nordenstadt meddled in Minchen’s wedding and had her turn down the young man, telling her she needed to go to America instead. When talking to their relatives, the folks in Nordenstadt had spoken very highly of Lenchen’s marriage. Then, Lenchen’s cold letter arrived, in which she wrote – among other things – that the girls should be glad to be at home and that she herself had not found what she had been looking for. Lenchen and her letter are to blame for the girls thinking that things did not turn out well. We have not heard any news about Lenchen from our relatives in Nordenstadt yet – not after the initial praises. On Sunday morning, we received another letter from him, but all he wrote was that August is now in Green Bay, at the bakery with Karl. Several girls from our neighborhood here in Wiesbaden have gone to America, married very well, and no longer want to return to Germany. It is understandable, of course, that not everyone will be happy over there. After all, everybody is different. When the Nordenstadt relatives all voiced their disapproval with Minchen Scheu’s wedding and tried to force her to leave, I often spoke against them. For, Minchen is too old anyway and has never been anywhere or experienced anything. However, if a girl is only 20 years old and wants to start a new life over there, it is possible, I believe. Here, things are still the same; as far as business is concerned, there is nothing going on. Herrmann is in the process of making a table, which we will give to Wilhelm as a wedding present.

Other than that, there hasn’t even been a chair to upholster for weeks.

Considering the bad times, Johanna will not get around looking for a job eventually. And so we have decided to send her someplace in the fall. I was thinking of a housekeeping school, where she could learn to cook, bake, sew, and perform other household tasks. She cannot stay at home like this since she gets all gloomy. Besides, she needs to learn to interact with people, which she cannot do here. In a few more years it will be too late. And I would not want to be blamed in the future for failing in this respect. I would like to ask you to discuss this with Willy and to see whether, in the fall, each of you could start sending us $10 per month for about a year to use for Johanna. Currently, with the government-controlled economy, we are unable to mortgage our house any more. Mrs. Bender told me that some daughters of her relatives in Runkel were in [illegible] and that it cost 1,000 marks. We don’t know anything specific yet, but it will likely cost that much. Mr. Bender is going to Schadek for two weeks. While there, he will also go to Runkel and find out more information for us. Please let me know in your next letter whether it is feasible for you. What are you earning; are you still paid the same?

Walther Ewald wants to go to America as well. He is a traveling salesman selling electrical lamps. Things don’t seem to be going too well for him, either. On Sunday, we observed him in serious conversation with Reverend Eickmeier. Heini Müller wants to come here to study at our university. Whether that is a good idea is questionable. Finding a place to stay here is impossible. We have many millions of unemployed. Heini Ewald said that there is no guarantee that everything won’t collapse one of these days. […] Please have Willy read the letter as well […] Kindest regards […] Mother.