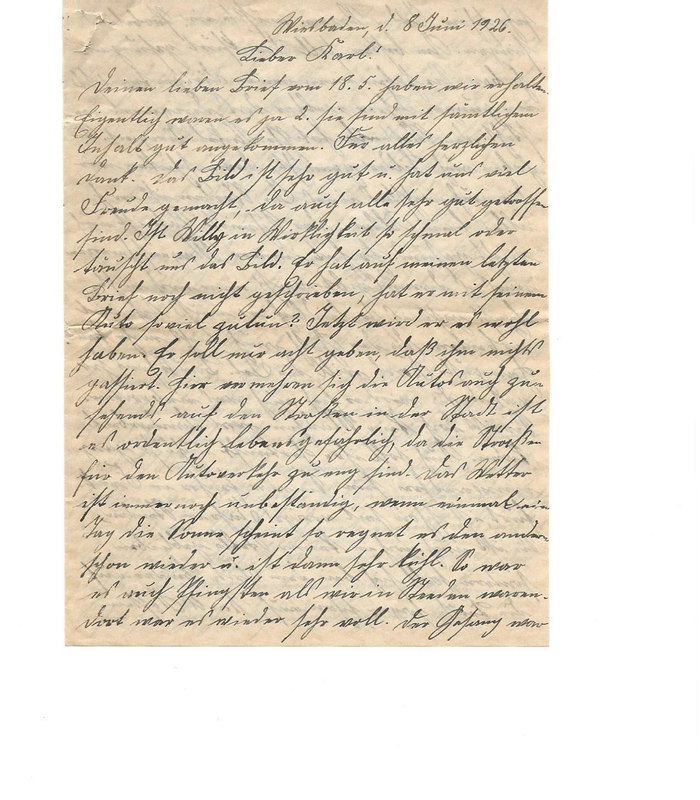 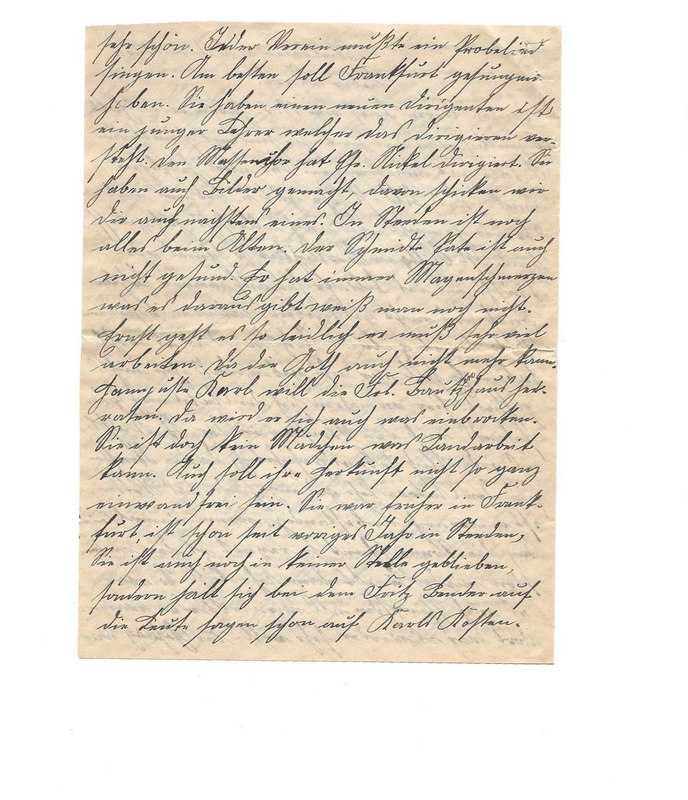 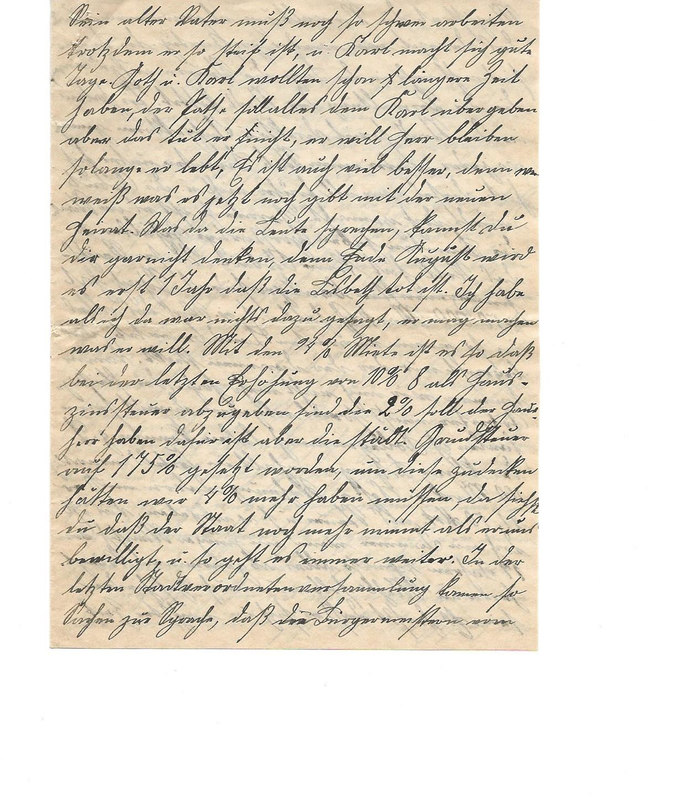 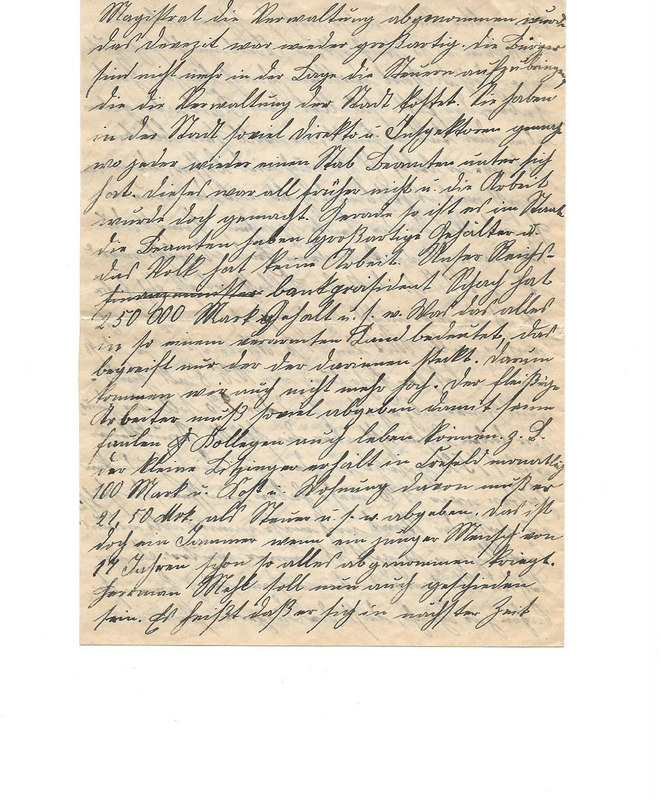 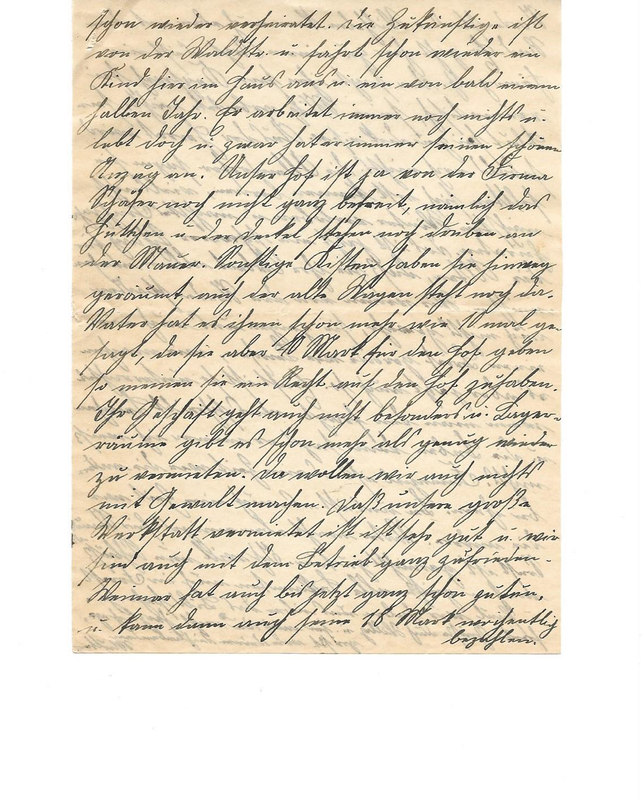 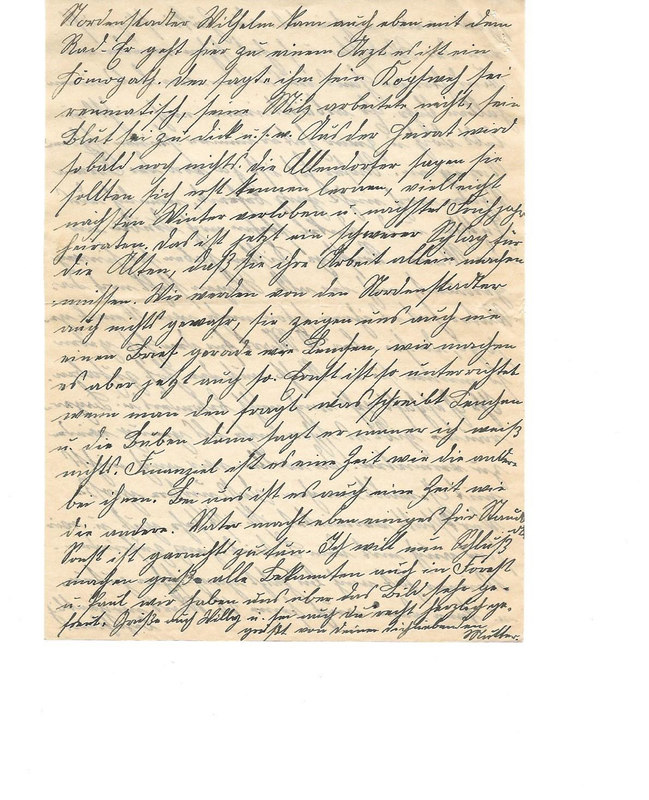 Letter from Johanna Emmel to her brother, Karl Emmel, June 8, 1926.

We received your letter dated May 18th[…] then there was another one[…] the photo is very pretty […] Is Willy really that thin, or does it just look that way in the picture? He has not responded to our last letter yet. Is he truly that busy with his car? [....] I hope he is careful and makes sure that nothing happens. There are more and more cars on our streets as well. In the city, you have to fear for your life because the streets are really too narrow for cars to drive through. […] It was the same way in Steeden at Pentecost, i.e. quite cool. There were a lot of people there again. The singing was beautiful. Each group had to sing a contest song. Supposedly, the group from Frankfurt sang the best. A young teacher who knows how to conduct directs the group. Reverend Nickel conducted the mass choir […] Everything is still the same in Steeden. Patt Schmidt is not very healthy, either. He gets frequent stomach pains […] Ernst is doing ok. He has a lot of work because Mrs. Goth can no longer do very much.

This is how it works with the 14% of the rent: The last increase was 10%. Of these, 8% have to be paid to the government; the remaining 2% can be kept by the landlord. However, now the city property tax has been raised to 17%. In order to cover that, we would have had to receive 4% more. As you can see, the federal government is still taking more from us than it lets us ask from our renters. And things just keep on going this way[…] The citizenry is unable to come up with the money to pay the taxes needed by the city. The city government has created a large number of positions for directors and inspectors, each with his own subordinate staff. It never used to be this way, and yet the work always got done as well. It is the same at the national level: the civil servants have nice big salaries, and the common man has no work. Our President of the National Bank, Schach, earns a salary of 250,000 marks, and so forth. […] It is a good thing that our bigger shop is rented out and that we like the enterprise that is renting it. So far, Weimar has had a steady stream of work and has been able to pay his 18 marks per week.

Wilhelm from Nordenstadt was just here; he came by bike. He is seeing a doctor, a homeopathic specialist, here. The doctor told him that his headaches are caused by rheumatism, that his spleen is not working properly, that his blood is too thick, etc, etc. There won’t be any wedding just yet. The people in Allendorf are saying that the bride and groom should get to know each other first, perhaps become engaged next winter and then marry in the spring. This is quite a blow for the folks, who now will have to do their work on their own. The family members in Nordenstadt do not tell us anything; they never show us any letters from Lenchen. Therefore, we are now doing the same thing. Ernst must have been instructed to say that he does not know anything whenever we ask him how Lenchen and the boys are doing. Financially, everything is still the same there.

Father is currently making a few things for [illegible]. Other than that, there is no work.

Say hello to all our acquaintances, to the ones in Forest as well as to Paul and Willy […] your loving mother.

A little post scriptum from Johanna. She writes about the Choral Festival in Steeden and says thank you for the dollar. [...] Eula’s Willy? Is no longer writing. I hope he has got his car and can write sometime now. […] We have not heard anything from Mr. Dietrich; what is it with him?[…] Kindest regards, your sister Johanna.