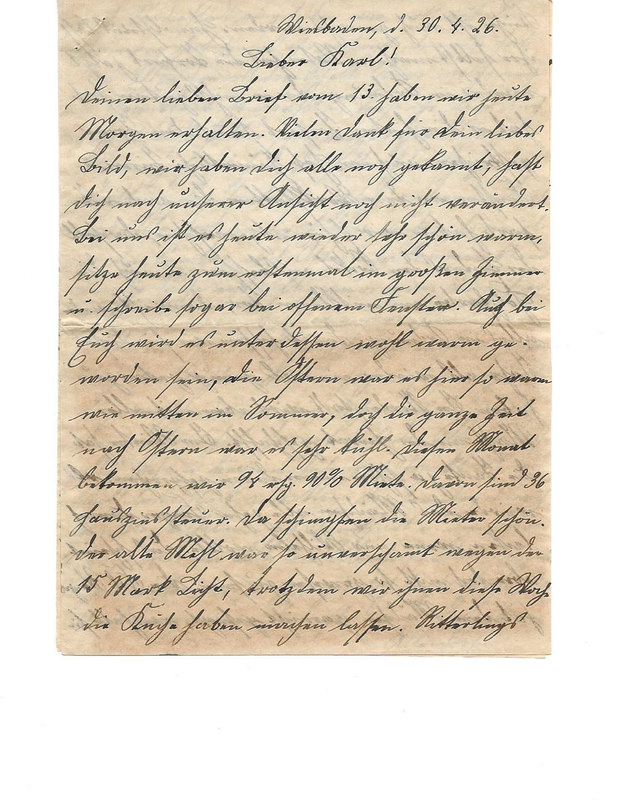 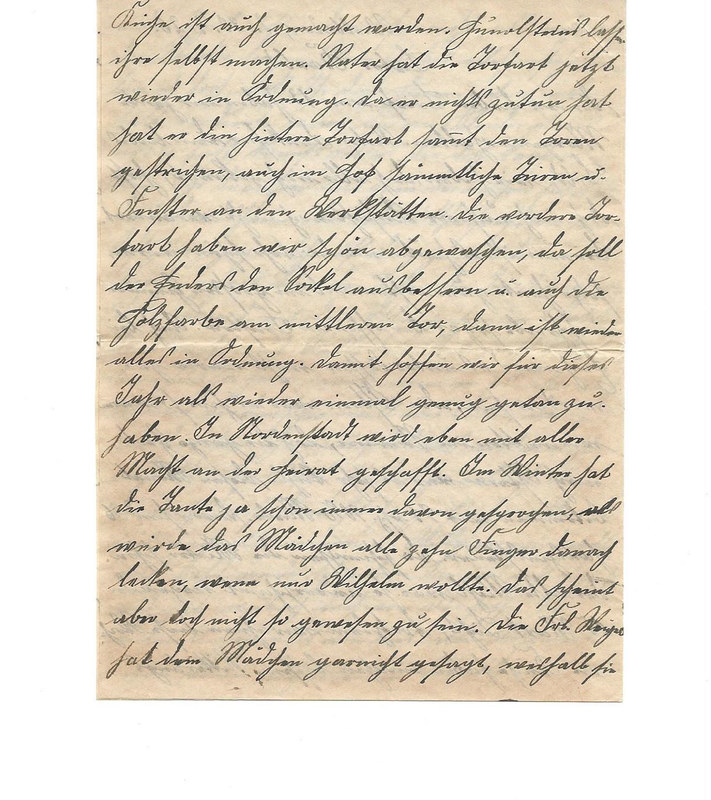 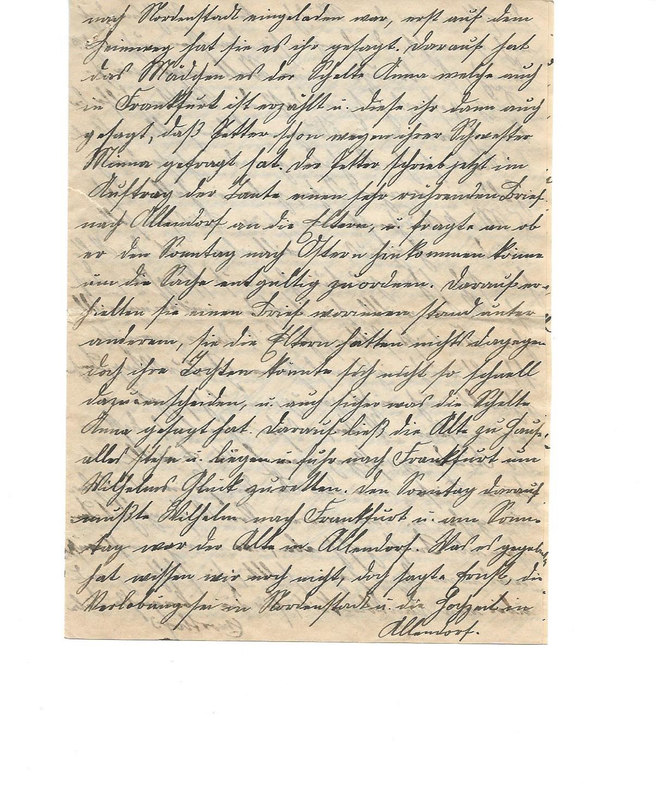 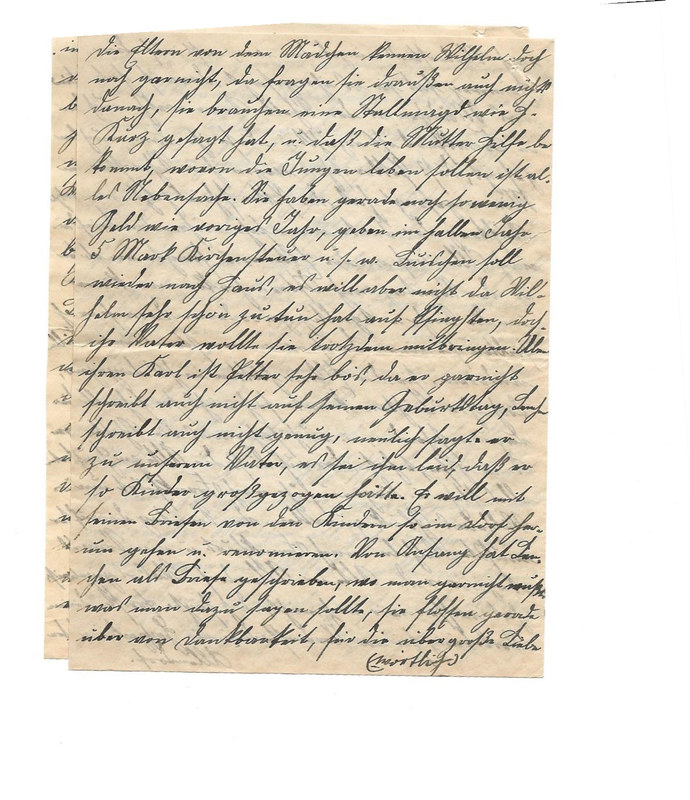 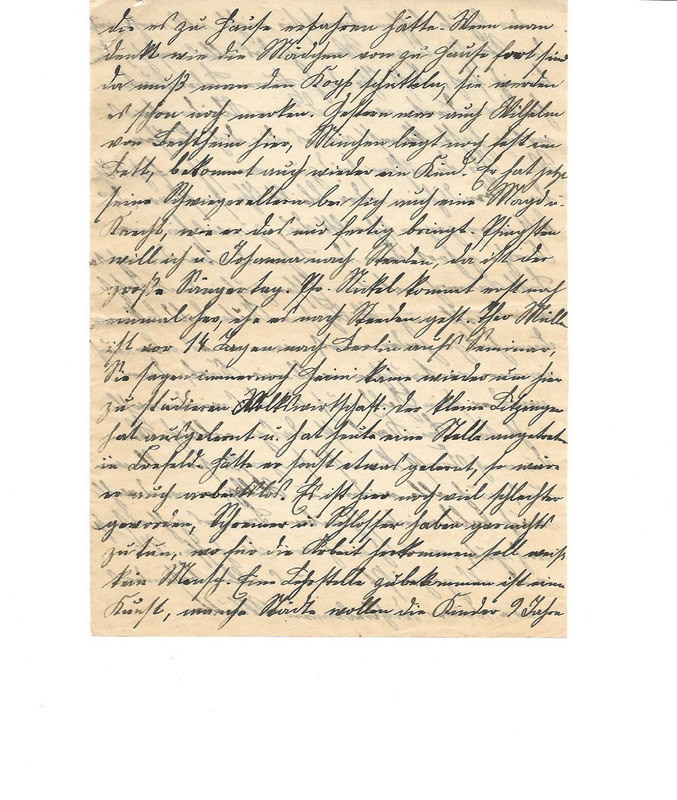 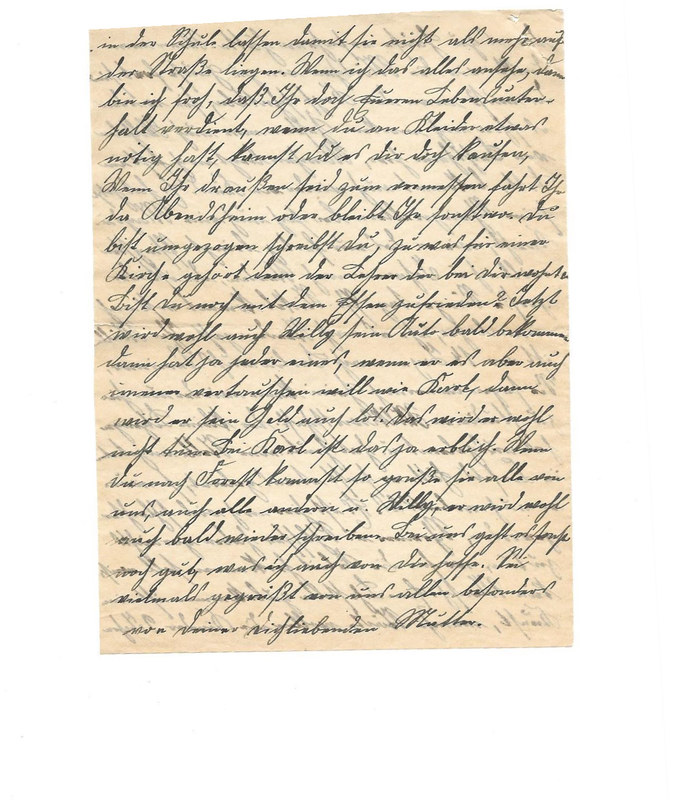 […]It was very warm here at Easter, just like in mid-summer. […] This month, we are receiving 90% in rental fees, 36 of which are apartment rent. The renters are all complaining loudly […] Old Mehl got very impudent over the 15 marks he needed to pay for his electricity bill, even though we just renovated their kitchen this week. We did Ritterlings’ kitchen as well. […]Father also repaired the front of the entrance gate. Since he had nothing else to do, he painted the entrance and gate as well as all the doors and windows of the shops facing the courtyard. We washed down the entire front of the entrance gate, too.

In Nordenstadt, they are moving heaven and earth to make the wedding happen. All through the winter, Aunt has been talking as if the girl was dying to get married to Wilhelm and as if it was just a question of whether Wilhelm wanted to marry her. The former does not seem to be the case, however. Miss Weigel had not told the girl why she was invited to Nordenstadt. She did not say anything until they were on their way home. Consequently, the girl talked to Anna Schelde, who also lives in Frankfurt, and learned from her that Petter had previously asked about her sister Minna on his son’s behalf. After that, following Aunt’s orders, Petter sent a very moving letter to the parents in Allendorf. In it, he asked whether he could come and see them on Sunday after Easter in order to straighten everything out once and for all. In response, Petter and Aunt received a letter saying – among other things – that they, the parents, were not against it, but that their daughter needed more time to decide. I am quite sure that they also mentioned what Anna Schelde had told the girl. Following that, Petter dropped everything and traveled to Frankfurt to save his son’s happiness. On the following Sunday, Wilhelm was sent to Frankfurt, and last Sunday Petter was in Allendorf. We do not know any details yet, but Ernst did tell us that the engagement will be celebrated in Nordenstadt and the wedding in Allendorf. The girl’s parents have not even met Wilhelm yet. Petter and Aunt, however, do not seem to care much about that. They need a milkmaid, as H. Kurz expressed it, and Aunt needs help as well. Whether the young couple will be able to make a living is of minor importance. The family has just as little money as last year; they pay 5 marks in church tax every six months, etc. Little Luise is supposed to come home again, but does not want to do so because Wilhelm will have a lot of work waiting by Pentecost. But her father wants to bring her back anyway. Petter is quite mad at their son Karl because he does not write at all, not even for Petter’s birthday. Lenchen does not write often enough, either. Recently, Petter told Father that he was fed up with the way his children had turned out. Nevertheless, he wants to go around the village and show off the letters of his children. Right at the beginning, Lenchen started writing letters that seemed quite puzzling to us. They overflowed with gratitude and with professions of the exceptional love (literally) she had received from her parents. Think about the way the girls left their home, and you can only shake your head. Sooner or later they will realize how things really are.

Wilhelm from Bechtheim was here as well yesterday. Minchen still needs plenty of bed rest; in addition, she is expecting again. Wilhelm now has his parents-in-law living with him as well as a maid and a farmhand. How does he do it? On Whitsunday, Johanna and I intend to go to Steeden to attend a big choral festival. Reverend Nickel is coming here again before going to Steeden.

Theo Müller left for the seminary in Berlin two weeks ago. We are still hearing that Heini is coming back to study economics here. […] The situation has become much worse yet. Carpenters and metalworkers cannot find any work whatsoever[…]finding an apprenticeship placement is virtually impossible […] some cities are considering making 9 years of schooling mandatory in order to keep the young people off the streets […] Seeing all this, I am glad that at least you are able to make a living. If you need new clothes, at least you can buy some […] you moved; which church did you join? […] Do you still like the food there? Soon, Willy will get his car as well. Then you will both have one. However, if he starts trading in his cars all the time – like Karl does – he will lose money in a hurry. I guess he knows better than that. With Karl it is hereditary as we know. Kindest regards to all of you, Mother.