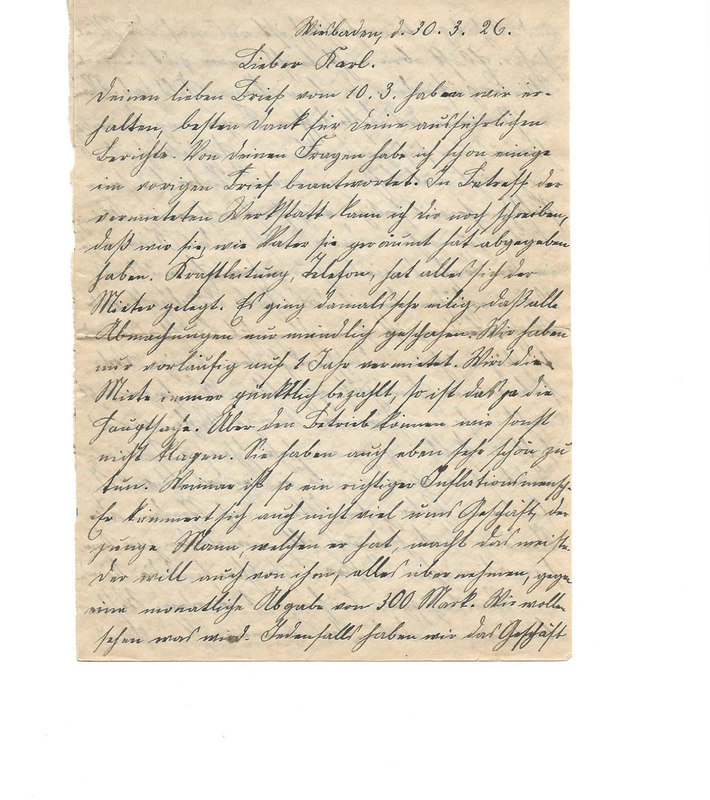 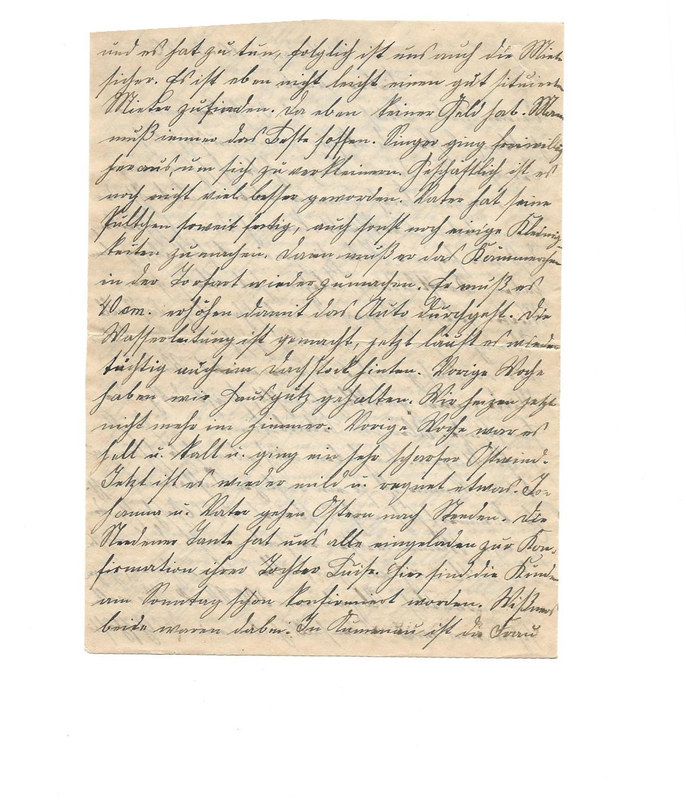 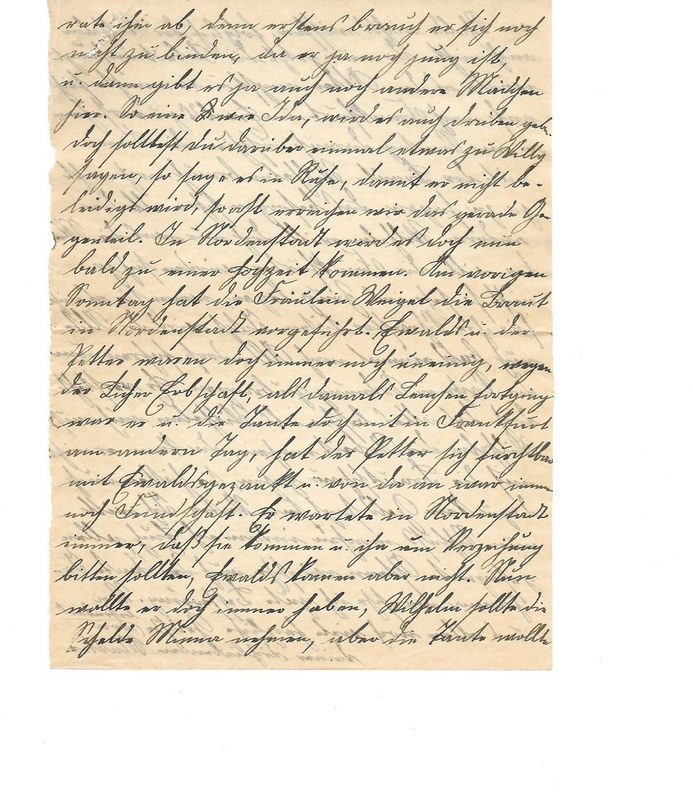 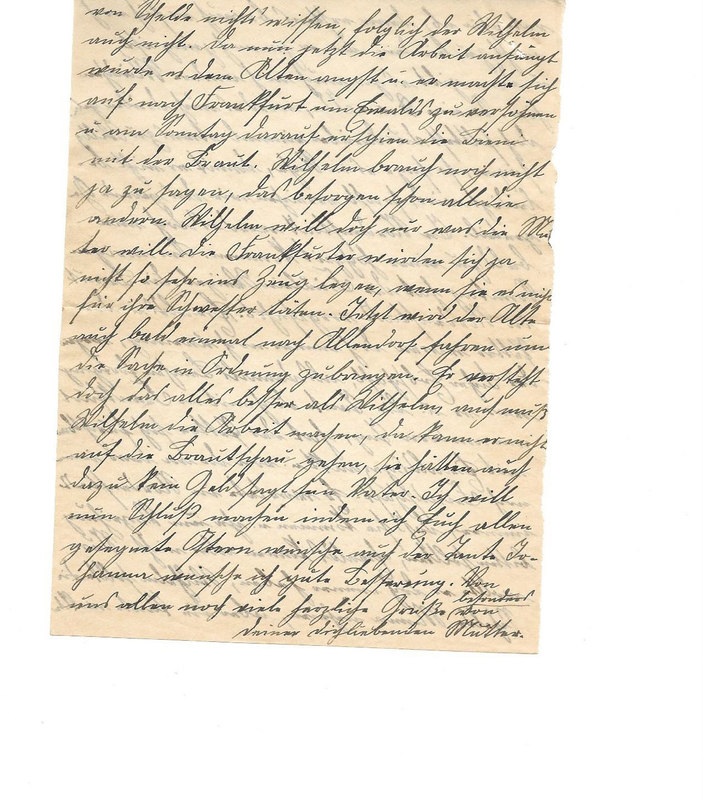 […]concerning the shop we rented out, all I can tell you is that we let the renter take it over the way it was after Father moved all his things out of it. The renter had power and telephone lines installed[…] At this point, we only have a one-year contract to rent out the space. The important thing is that the rent is always paid on time. […]Weimar is a real inflation type. He is not very involved in his business, either. The young employee he has takes care of everything. He wants to take over everything from Weimar for a monthly fee of 300 marks. At any rate, the business is located in our house, and it is making money. Consequently, we will receive our rent. […] Father has finished the little desks and needs to make a few other small items. After that, he needs to close up the little room at the front of the gate again. He has to make it 16 inches higher for the car to fit through […] Johanna and Father are going to Steeden for Easter. Our aunt in Steeden invited us all to the confirmation of her daughter Luise. Here, the children were confirmed on Sunday already. Wissners’ two children were confirmed as well. Mrs. Hasselbach in Aumenau passed away. She was a sister of our aunt in Nordenstadt and, just like her, died from the flu and pneumonia. The elder Naus couple left Hamburg aboard the “Deutschland” to travel to America. They said it was for a year at this point. They will first go to see their son, who is a professor in the south. From there, they will keep traveling north until they reach Wisconsin. Once there, they intend to contact Lenchen. They would like to see all of you while they are there. […] On April 4th, Karl from Beuerbach is leaving aboard the “Hamburg”; this will be the ship’s first voyage. We heard that he wanted to return his ticket. However, Wilhelm informed him in a letter that he would not take the loss. Karl has no money and therefore will have to go. He did tell the aunt in Ennerich, however, that he promised his future wife he would come back, should she not want to go to America. He came to see us as well, but did not say anything about that. Otherwise, Father would surely have given him a piece of his mind. Granted, Karl is a nice young man, but terribly dumb. He is the kind they like in Schönborn, one who will spend 3 hours traveling to and from work.

I want to tell you about something that has been on my mind. Karl told Father during his visit in Beuerbach that Willy intends to marry a girl from Schönborn as well when the time comes. Willy is thinking of Ida, who is Johanna’s age. However, we do wish for Willy to have a better wife than her some day. Yet, I do not want to write to Willy about it myself. Should you notice that he is sending letters to Schönborn, please advise against it. First of all, he is still very young and does not need to commit yet; second, there are plenty of other girls here. Furthermore, I am quite certain that there is an Ida somewhere over there as well. Should you say something to Willy, please do so very gently. You do not want to insult him; otherwise the discussion might have the opposite of its intended effect.

There will be a wedding in Nordenstadt after all. Two Sundays ago, Miss Weigel introduced the bride to the family members in Nordenstadt. As you know, the Ewald family and Petter had still been at odds with each other because of a disagreement over the Licher inheritance. The day after Lenchen’s departure, Petter and Aunt went to Frankfurt, where Petter ended up getting into a terrible argument with the Ewalds. They had been enemies ever since. Petter kept waiting in Nordenstadt for them to come and ask for his forgiveness. However, the Ewalds never came. As you know, though, Petter always wanted Wilhelm to marry Minna Schelde, but Aunt did not even want to hear the name Schelde. Consequently, Wilhelm did not, either. But when all the work began again, the old folks got scared. So Petter went to Frankfurt to make peace with the Ewalds, and on the following Sunday Bieni showed up with the bride. There is no need for Wilhelm to say “yes” yet; all the other ones are doing that for him. After all, Wilhelm only wants what his mother wants. The Frankfurt branch of the family would not put this much effort into everything, were it not for their sister. Soon, Petter will go to Allendorf again to finalize things. Admittedly, he knows more about these things than Wilhelm does. Moreover, Wilhelm needs to do the work and does not have the time to go looking for a bride. There is no money for Wilhelm to do so anyway, his father says.