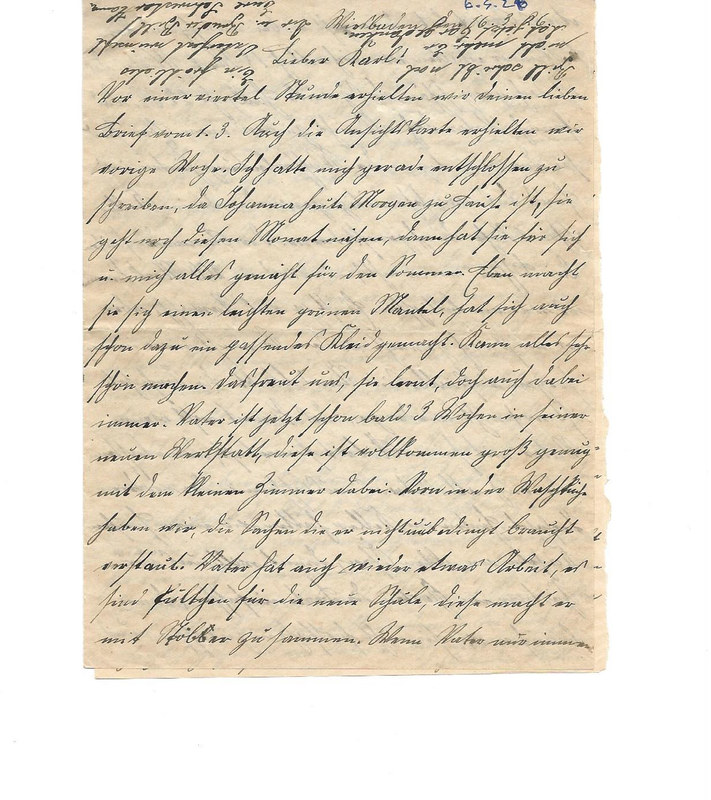 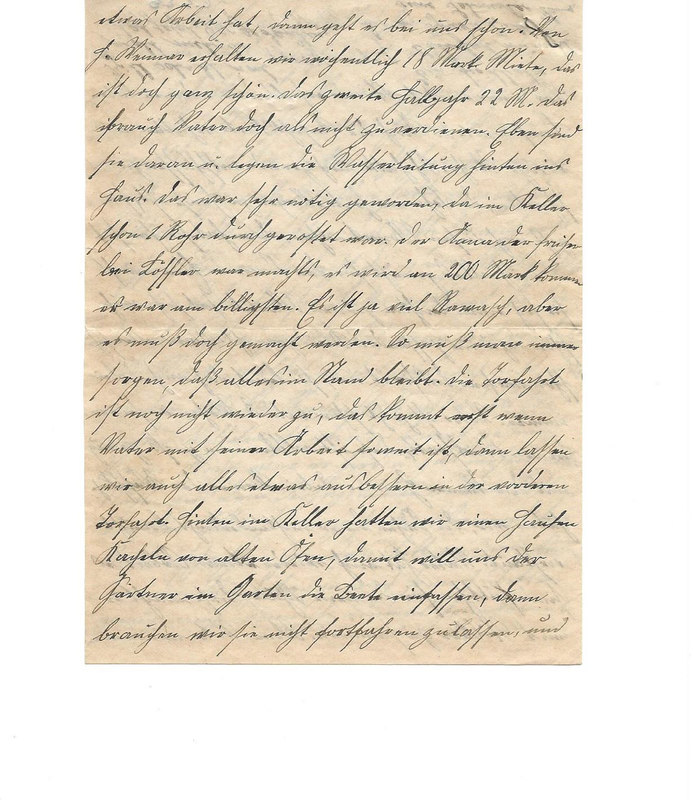 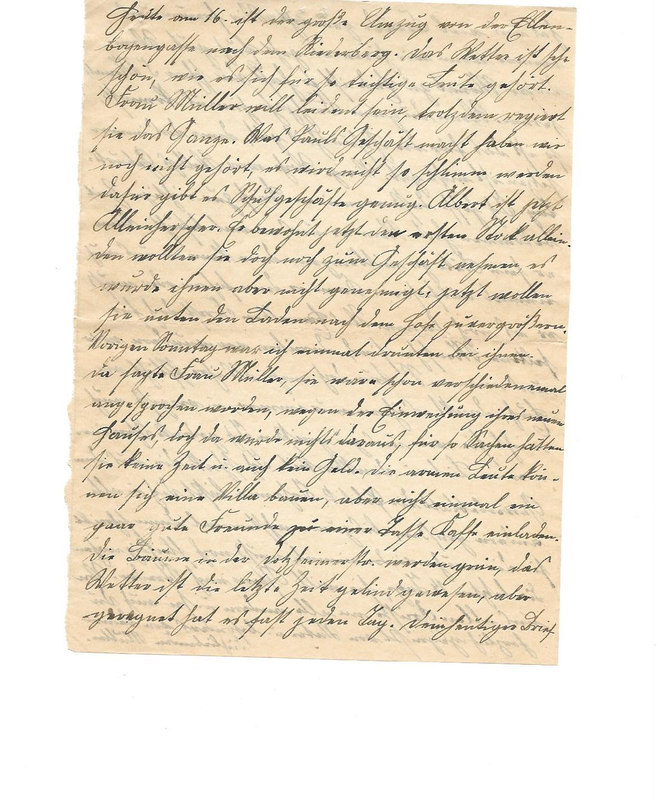 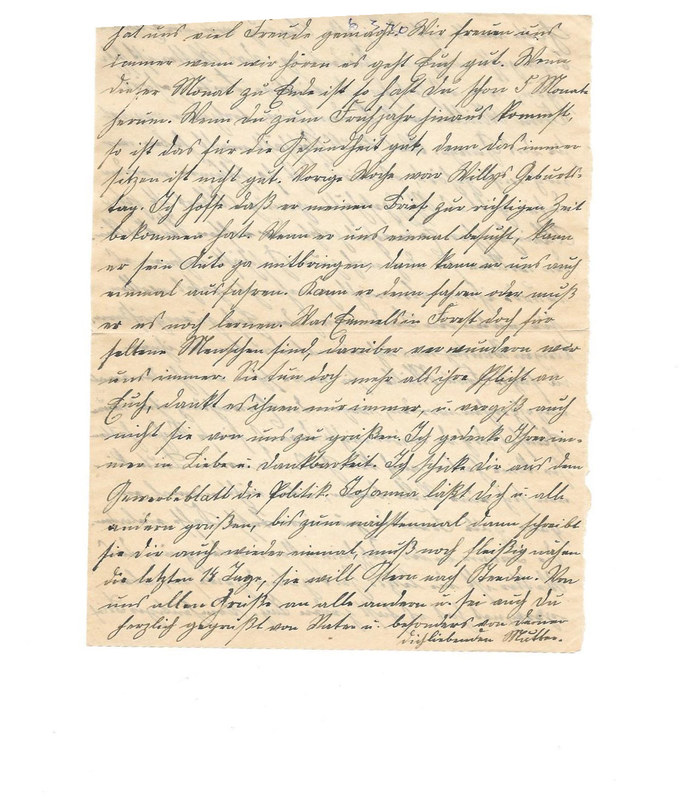 Letter from Caroline and Johanna Emmel to their son/brother, Karl Emmel, March 16, 1926.

[Hannchen] Bill is no longer writing; he only has cars on his mind these days. I wish you and our brother Bill a Happy Easter. Your sister Hanna.

[Mother] Johanna is at home. She will go and sew for another month. By then, she will have sewn everything she and I need for the summer. She is currently sewing a light, green coat for herself, for which she has already finished a matching dress. […] Father has been in his new shop for 3 weeks now. Combined with the small room, he has just the right amount of space. Father has a little bit of work again. Together with Stöber, he is making little desks for the new school. As long as Father keeps getting some work we can manage….Weimar pays us 18 marks per week to rent the shop, which is quite nice. After six months, he will pay 22 marks. All that is money that Father does not need to earn. […]Right now, they are laying water pipes leading to the back part of the house. This had become necessary because of a pipe in the basement that had already rusted through […] It will cost about 200 marks […] The entryway at the gate is still open. It won’t be closed until Father has completed his work. […] In the back of the basement, there was a pile of old tiles from old stoves. The gardener wants to use them to border the beds in the garden. That way, we will not need to have them hauled away. Afterwards, we will have a truckload of gravel brought in. […] The Stritters did not like the fact that we rented the space out to someone else. For the past 5 weeks, they were supposed to come and move their things out of the courtyard […]Weimar’s machines are not that loud; all we hear is the whistling of a motor. […] His workers are very nice as well […] Mrs. Buck is leasing her business to Franz Zingelmann, who had moved into the front part of her house last year. She wanted to marry Becker, the innkeeper at Kirchgasse. One beautiful day, she moved in there with her little boy and her maid and took over the reins. Once the Carnival season was over, she reappeared at Dotzheimerstrasse. She had kept her apartment […]Rumor has it that she will not marry Becker […] Apparently, he has a lot of debts, and his daughters are not exactly perfect, either…. Now she is taking Becker to court because she lent him close to 1,000 marks, which he has not paid back yet. […]

In Nordenstadt, things are back to normal. Wilhelm is healthy again. He was here last week and picked up our old chairs from the living room as well as a bed from the dormer.

We had to make room for the bed from the small bedroom. However, we still have enough beds, even if you came home sometime.

Today, the 16th, is the day of the big move from Ellenbogengasse to Riederberg. [...] Mrs. Müller claims to have health problems, but rules over the whole event. We have not heard anything about Paul’s business yet. […]There are enough shoe stores already, though. Albert is now in charge all by himself. He has the entire second floor to himself. They had wanted to use that floor for business purposes as well, but did not receive permission. Now they want to enlarge the store in the direction of the courtyard. Last Sunday, I went to see them down there. Mrs. Müller told me that several people had asked her about an inauguration of her new house. She said that there wasn’t going to be one and that she had neither the time nor the money for such things. Those poor people! They can afford to build a mansion, but won’t even invite a few good friends to a cup of coffee. […]It would be good for your health if you could spend some time outside in the spring. Spending a lot of time sitting in a chair is not good for you. Last week, Willy celebrated his birthday. I hope he received my letter in time. If he comes to see us sometime, he should bring his car along, so that he can give us a little tour. Does he know how to drive at all? Or does he need to learn yet? We keep being surprised by the things the Emmels in Forest do; you seldom find people like that. They certainly do more for you than one would expect. Do show them your gratitude[…]Kindest regards, Mother.